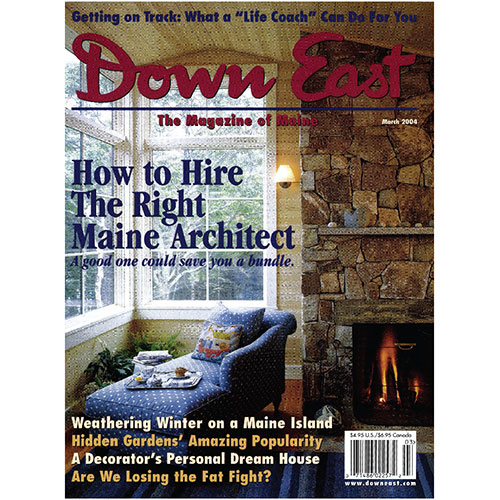 While certain locals complain Vinalhaven is dead in March, most residents will tell you the island community is more alive than ever — and no one goes unnoticed. By Christine Parrish.

How to Hire the Right Maine Architect

A handful of do’s and don’t’s for people building a new house, considering a renovation, or wondering about an addition, plus a few common misconceptions about getting professional help. By James Schwartz.

Everything at Hidden Gardens in Searsport is robust enough to make it through the long season — the perennials, the shrubs, and the engaging couple who carved this remote nursery out of the hinterlands. By Richard Grant.

Maine’s New Battle of the Bulge

Emboldened by the success of its antismoking campaign, the state is now taking aim at the epidemic of obesity that has afflicted an appalling number of Mainers. By Jeff Clark.

A Decorator’s Own Dream House

A nationally recognized interior designer has used collections of antique prints and ceramics to enliven his Wiscasset retreat. By Meadow Rue  Merrill.

A rare shipboard glimpse of the largest wooden ship ever built in Maine, a vessel whose remains have just been located and whose mysterious demise may at last be explained. By Joshua Moore.

North by East: Beyond Moosehead

Advisories and musings on a remarkable piece of the North Woods that has just been saved, the way most Mainers view questionable business dealings, and a certain lobster from Mount Desert Island that has become known far and wide.

The Talk of Maine: Pep Talks

A growing number of so-called  life coaches are helping Mainers get through more than just the winter. By Monica Wood.

The town fire horn used to call the community together every day, as an editorial from the Mount Desert Islander points out. Plus opinions on the overcrowding in Maine’s prisons, a rural town whose intelligent planning sets a new standard for other communities, and the ongoing debate over one-armed bandits.

The road to Friendship leads past one of the prettier bed-and-breakfasts on the midcoast. Plus tips on virtual golf links for snowbound duffers, a new  web site that lets you click your way down Congress Street in Portland, a capital barbecue in Augusta, a tour of the Queen City’s loftiest perch, snowshoes  for two, and an old church in Portland that rocks at noon. By Andrew Vietze.

A wharf street restaurant offers Mediterranean elegance in the heart of the old Port. By Michaela Cavallaro.

Down East Bookshelf: Evil from Away

Criminal masterminds from Massachusetts are invading Maine, at least in three new mysteries. By Al Diamon.

Concerts and performances of all kinds offer relief for cabin-fever sufferers.

Every year, usually in March, there comes one particular day. . . . By Richard Grant.