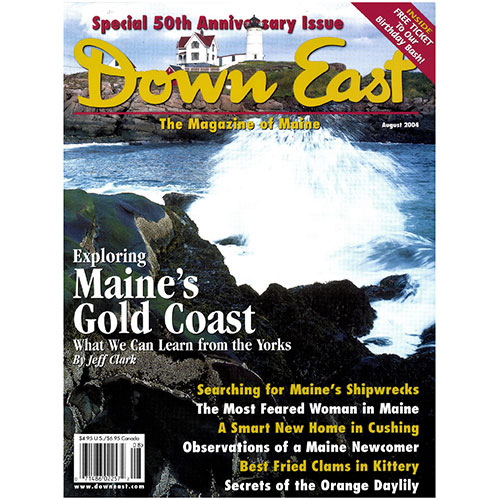 The magnificent communities that make up the southern Maine township of York offer a glimpse of what much of the rest of the state can expect to see  in the next decade.  A Special Report by Jeff Clark.

It’s excruciating but almost inevitable that contestants will get all wet at the Great International Lobster Crate Race. Photographs by Peggy McKenna.

Last of the Fleet

While the coast of Maine was once littered with shipwrecks, today only a handful remain. By Joshua F. Moore.

Masters of the Maine Outdoors

These days a Registered Maine Guide is as apt to help you photograph a moose as shoot one. By Andrew Vietze.

It’s a strange-shaped prominence that surely you’ve seen. Recognize it?

A man in Cushing has built a tidy new home that is as well suited to the neighboring houses as  it is to his own needs. By Meadow Rue Merrill.

Though the common daylily is often mistaken for a native weed, for more than 200 years Mainers have been busy planting it. By Richard Grant.

Most Feared Woman in Maine

Carol Palesky is the last person you’d expect to launch a referendum drive that could bring Maine government to its knees. By Jeff Clark.

Hard to believe, but some of the most famous denizens of the Pine Tree State are actually fictional. By Paul Doiron.

I’m no marathoner, but  I live near the course of the Beach to Beacon Race, and I figured that’s a good enough reason to give  it a try. By Michaela Cavallaro.

In fifty years the covers of Down East have changed about as much as the Pine Tree State itself.

Opinions and musings on the recent proliferation of fine places to dine, George Steinbrenner’s excellent taste in boats, and the unfortunate sale of Portland’s good name.

The Talk of Camden: Genuine Service

Amid all the changes  in Camden, a tiny downtown grocery endures – and prospers. By Virginia Wright.

The Queen City will have a gambling hall, whether or not that’s what Maine voters really wanted, according to an editorial from the Ellsworth American. Plus other opinions on funding the state’s laptop program, supporting the alewife fishery and restructuring the university system.

Weary shoppers can find rest at a nature sanctuary only a mile from L. L. Bean. Plus tips on a fine restaurant in Brooksville, a unique lighthouse tour in Boothbay, a bunch of no-fee ATMs, comfortable digs in K’port, and some exceptional ice cream  in Dover-Foxcroft. By Andrew Vietze.

In the midst of the Route I outlet malls, a simple seafood shack has become afast-food phenomenon. By Christine R. Parrish.

Down East Bookshelf: Of Lobsters and Men

Two excellent new books tell us things about lobsters we might not want to hear. By Agnes Bushell.

As I See It: A Newcomer’s Place

A Pulitzer Prize-winning author in East Boothbay has learned how to fit in. By Richard Ford.

A month of fairs, festivals, and summer theater.

What’s in a Picture: Hotel Inferno

When a Boothbay Harbor-area resort hotel burned back in 1913, it was dignity and decorum, and not flames, that ruled the day. By Joshua F. Moore.

I Remember: A Real Farmer’s Tan

The seat of a moving tractor probably wasn’t the best place for me to soak up the rays. By Trudy Chambers Price.