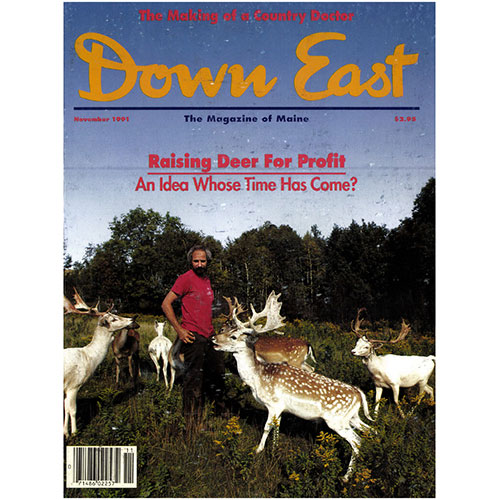 Half a dozen Aroostook towns helped finance the medical education of Dr. Roger Pelli. Now he’s paying them back with fourteen-hour days. By John Lovell.

The catastrophic 1864 wreck of the transatlantic steam bark Bohemian remains a mystery to this day. By Jeff Clark.

A three-year-old law permitting commercial deer raising has generated a score of new livestock farms — and plenty of controversy. By Brian Lomb and Susan Judy.

Winters of yore were the stuff of fable. By John Gould.

A Life in Pictures

Over half a century George Daniell has focused his camera on subjects as diverse as Sophia Loren and Grand Manan. By Carl Little.

Autumn ewes hold the promise of spring. By Kate Braestrup.

Time on Their Hands

No clock restoration is too big for the Balzer family of Freeport. By Chase Reynolds.

Gingerbread houses in Camden, mushrooms in Sunset, and flagpoles in Sargentville: three more success stories from the Pine Tree State. By John Boit.

At Belcher’s Counfy Store on Deer Isle, the antiques are both old and new. By Beth Crichlow.

When I walked with my dog this morning to the rocks at the northern end of the island, the wind had a cruel bite  to it and I knew that autumn was slipping into winter and that the chop in the cove would one morning be silenced under a skim of ice. By Caskie Stinnett.

The Talk of Cape Rosier

To Hunt and Fish in Maine by Edward Ware Smith

Cover: Ed Sousa, of Far Apart Farm in Brooks, inspects part of the herd of 100 fallow deer that he is raising for market. Photograph by Benjamin Magro.