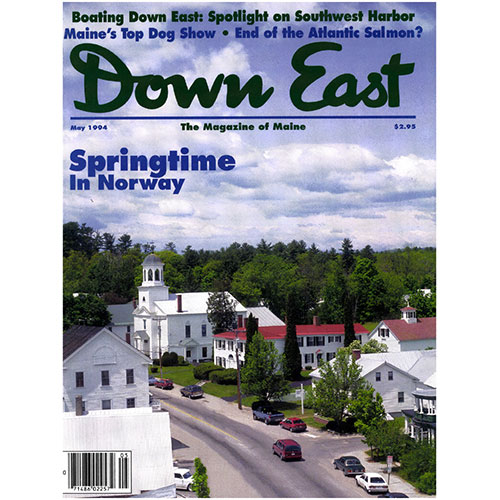 When springtime finally finds its way to this western Maine community, the village — and the wild country around it — quickens and blossoms. By Sarah Goodyear. Photographs by Benjamin Magro.

A cadre of upstart activists has brought a startling new strategy to the fight to save the Atlantic salmon. By Jeff Clark.

One of the more elegant heralds of springtime down east is a native wildflower that few ever notice. By Richard Grant.

Making it in Maine

For a well-satisfied mutt owner of long standing, Maine’s most prestigious dog show last spring was an eye-opener. By Edgar Allen Beem.

‘Tell Me You Are Contented at Home’

The Civil War letters between a Maine soldier in the thick of things and his family back home in Albion paint a poignant portrait of a chaotic era. By Jennifer Wixson.

Packing 400 cans of sardines an hour is an art form, as the author learned after just a day on the line. By Nicols Fox.

Running Away with the Circus

In his 1880 classic, Toby Tyler, South Portland’s James Otis Kaler captured every child’s dream and the imagination of the nation. By William Barry and Debra Verrier.

A guide to Maine’s summer pleasures afloat, compiled by the Editors of Down East.

In Maine we know more about lobsters than anyone else in the world, and it’s the belief of Mainers that the more you fool around with a lobster the less pleased you will be. By Caskie Stinnett.

The Talk of Town Hill