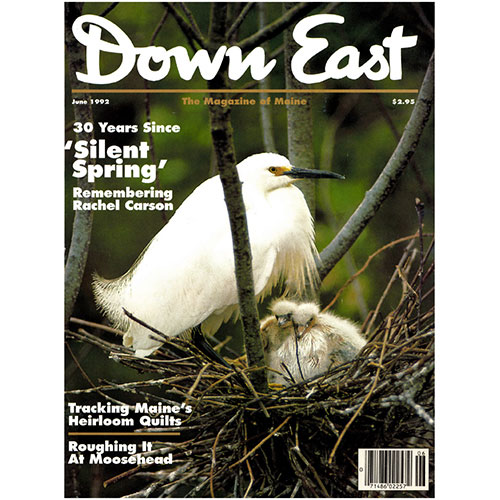 The Legacy of Rachel Carson

Caskie Stinnett recalls the mild-mannered woman whose seminal book, Silent Spring, published thirty years ago this year, touched off a revolution that continues to this day.

A small army of volunteers has spent the last six years locating antique quilts across Maine and finding out who made them. By Susan P. Speers.

A tiny house by the side ofthe road has been turning heads in Round Pond for more than a century. By Beth Crichlow.

Rare photographs chronicle the North Woods summers of one Philadelphia family in the Gilded Age.

A Parade of Sail

The romance of the Maine windjammer fleet is vividly captured in word and photograph in a handsome new book.

For the past sixty years on a New Vineyard farm, Sylvia Holbrook’s herd of shorthorn cattle has been her bread and butter — especially her butter. By W.N. Munroe.

Early and late, quietude reigns as the day wears on at Frenchboro Harbor on Long Island, seven miles off Mount Desert.

War of the Roses

Trial and error enabled an avid gardener to win her battle to keep island deer from devouring her flower bed — at least for now. By Jan Moss.

What Made Edgar Run?

Edgar Welch made  it into local history books not only by running up and down mountains, but also, quite literally, by moving them. By Alma Hansen Langlois.

The Maine island which is home to me most of the year is heavily wooded and I believe I know the peculiarities of every tree there. By Caskie Stinnett.

The Talk of Lewiston

Once and Future Champ