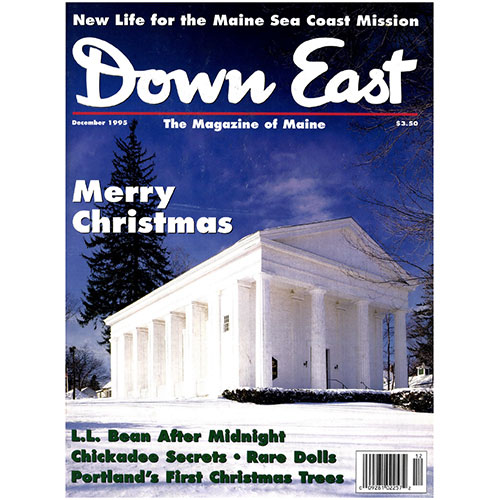 New Lifeline to the Islands

Even when islanders down east are locked in by winter, they know they can count on regular visits from the Maine Sea Coast Mission’s sturdy new boat and its capable new minister. By Ken Textor.

Portland celebrates Christmas present with a polite nod to its Victorian past. Photographs by Colin Malakie.

Come winter, the chickadee seems to get a kick out of being around people. Ever wonder why? By John Cole.

Margie Johnson didn’t understand the allure of limited edition dolls until she saw how fast they were walking out of her gift shop. By Daurelle Golden Harris.

The classic lines of Bath’s Church of the New Jerusalem are unequalled by any other house of worship in Maine.

Selling “Christmas trees” in Portland before the notion had quite caught on was a greater challenge than some enterprising upcountry boys had imagined. By C.A. Stephens.

An alchemist of the finest kind, Sam Shaw has an eye  for what is beautiful on the beach — and a unique way of revealing it to others. By Mark Condon.

Few vacationers have ever viewed this midcoast town from such an angle. Do you recognize it?

The Bean Scene Past Midnight

Who shops at Maine’s best-known outfitter in the middle of the night? Edgar Allen Beem stayed up to find out.

Just sixty years ago, the novelty of a municipal snowplow was still fresh enough in Fort Fairfield to warrant a formal portrait. By Ellen MacDonald Ward.

Getting to  the island in my small whaler would have been embarking on a fool’s errand; my hope at the moment was that the shack in which I had taken refuge would not blow over. By Caskie Stinnett.

The Talk of Bass Harbor

Ducktrap: Chronicles of a Maine Village by Diane Roesing O’Brien

Cover: The Church of the New Jerusalem, Bath, by Brian Vanden Brink.