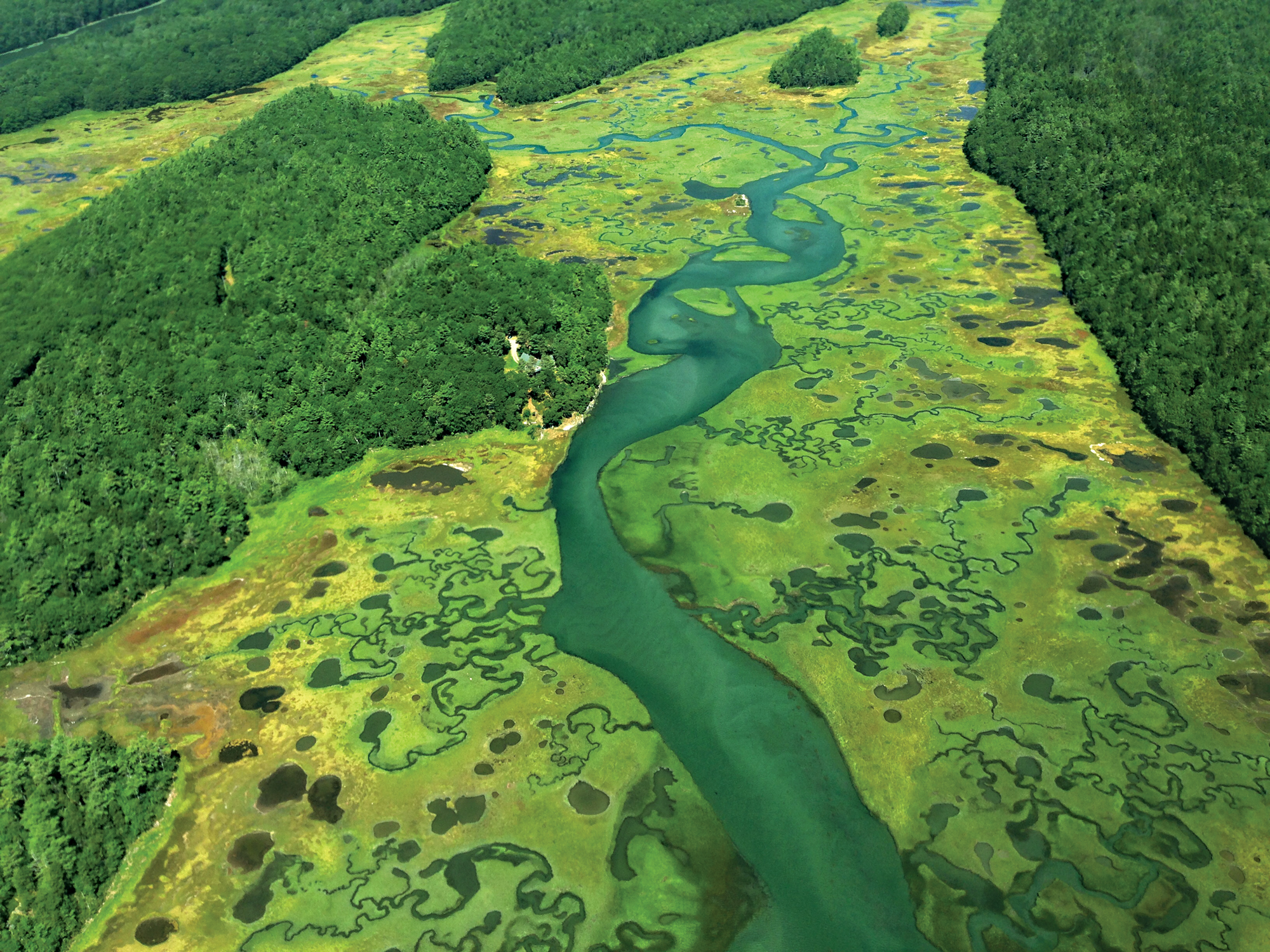 kdb’s Wilderland project grew to include aerial surveys of the region, which contains more than 20 percent of Maine’s tidal marshes.

As a child growing up in southern California, kdb Dominguez knew for certain she was three things: an artist, a gardener, and a Catholic. Not coincidentally, her mother was also all three, and kdb (who prefers to go by her nom de plume, an acronym of her birth name and her formerly hyphenated surname) remembers laying vegetables they’d grown at the feet of the Virgin in the Monseigneur’s garden. Her first words, she says, were “Jesus,” “Mary,” and “Van Gogh.”

Today, art and horticulture remain two of the pillars of kdb’s life — and, well, two out of three ain’t bad. At 58, she is passionate about biosophy, the belief that the divine is found in all of the systems of nature, and she’s prone to name-checking Baruch Spinoza, the 17th-century Jewish-Dutch philosopher and forebear of the Deep Ecology movement, branded a heretic by both Catholic and Jewish authorities.

Grasses on the Morse River salt marsh, near Seawall Beach.

Of late, kdb has been finding the divine in the coastal dunes, salt marshes, and tributary streams of the Kennebec estuary, the great river’s lower watershed. The Bath resident has lived among those streams and marshes for some 17 years, after trading Malibu for the lower midcoast following years of Maine vacations. She brought with her a thriving landscape-design business but eventually transitioned to making her full-time living from painting and photography. Then, in 2014, kdb read a paper about the rapidly warming Gulf of Maine, published by the Gulf of Maine Research Institute, and an impressive, quasi-scientific, mildly quixotic four-year photo odyssey was born.

“I decided what I would do,” kdb says, “is document the watershed, from Merrymeeting Bay to the river’s outlet at Popham Beach, in order to create a photographic record of the ecosystem, something to share with the Gulf of Maine Research Institute or any other scientists that may want to see, decades from now, how rising and warming waters have impacted the region.”

In its later years, kdb’s project occasionally mission-creeped into adjacent watersheds. This low-tide shot was taken near Bowdoin College’s Schiller Coastal Studies Center, in Harpswell, where researchers examine the effects of climate change on coastal ecosystems.

So kdb rented the upper story of a garage near Popham Beach and designated it basecamp. She plotted out her photographic sites on a series of large USGS quadrangle maps, in order to see that every region of the watershed was represented. She christened her endeavor the WilderlandMaine Project and committed herself to documenting the region’s landscapes and wildlife every single day for a year. At the end, she told herself, she would have a thorough visual catalog that biological researchers could consult as a kind of baseline study in the decades to come.

After a year in the Wilderland, however, kdb found her four-season catalog still felt less than complete. Year One became Year Two. She gave up her rented basecamp but kept up her practice. Year Two became Year Three. She roped in friends with boats and a fixed-wing Cessna to shoot from the water and sky. Year Three became Year Four — and only this fall has kdb officially brought her Wilderland project to a close.

Phase I, anyway. Phase II involves writing grants to help facilitate cataloging and tagging thousands of images, then creating them a permanent and searchable digital home. kdb also makes Wilderland calendars and has plans for a series of coloring and activity books to teach kids about coastal ecosystems and climate change. Then there’s the gallery show, opening this month at Bath’s Chocolate Church Arts Center, showing off photos, paintings, and illustrations from kdb’s four years of rambling through her own wet and wooly backyard.

The inland delta of Merrymeeting Bay.

Beach grasses at Popham Beach, where the Kennebec meets the sea.

A misty marsh on Merrymeeting Bay.

Phippsburg’s Hermit Island, beloved by campers in summer, feels lonely in the shoulder seasons. “From October through March or April, the only person I see out there is me,” kdb says. “It’s like I’m the hermit. It’s such a gift.”

An autumn scene on the New Meadows River.

But don’t confuse the Wilderland with the wilderness. “Wilderness is maybe Mount Katahdin,” kdb says, “but we don’t really think of the Phippsburg region as wilderness — it’s unadulterated nature, but it’s a little closer to town. I can be out shooting in my muck boots and be in downtown Bath having a martini 20 minutes later.” She settled on “Wilderland” to describe her surroundings after hearing it in a Joni Mitchell song and reading it in J.R.R. Tolkien. Wilderland, she says, is less imposing than wilderness: “It’s kind of fanciful. It’s a place of magic.”

Some ecosystems, to hear kdb tell it, have more magic than others.

“I love marshes, and I love bogs,” she says. “I love buggy, stinky places — it’s true. And I get made fun of for it. All summer long, my friends just call me ‘itchy-scratchy.’”

But, as kdb explains and her images attest, there is more to Maine’s quietly stunning salt marshes than just bugs and odors. There may even be a touch of the sacred.

“I have always believed, and I think that Darwin agrees with me, that life began in the marshes,” kdb says. “A marsh is stinky because it’s so filled with life — bodies and bodies of decomposing proteins. It’s filled with birds, the long-legged beauties: herons, egrets, and ibis. To me, the marshes are just dear and sweet places, and I cannot imagine a world without them.”