How an unassuming Maine homebuilder became a reality TV star. 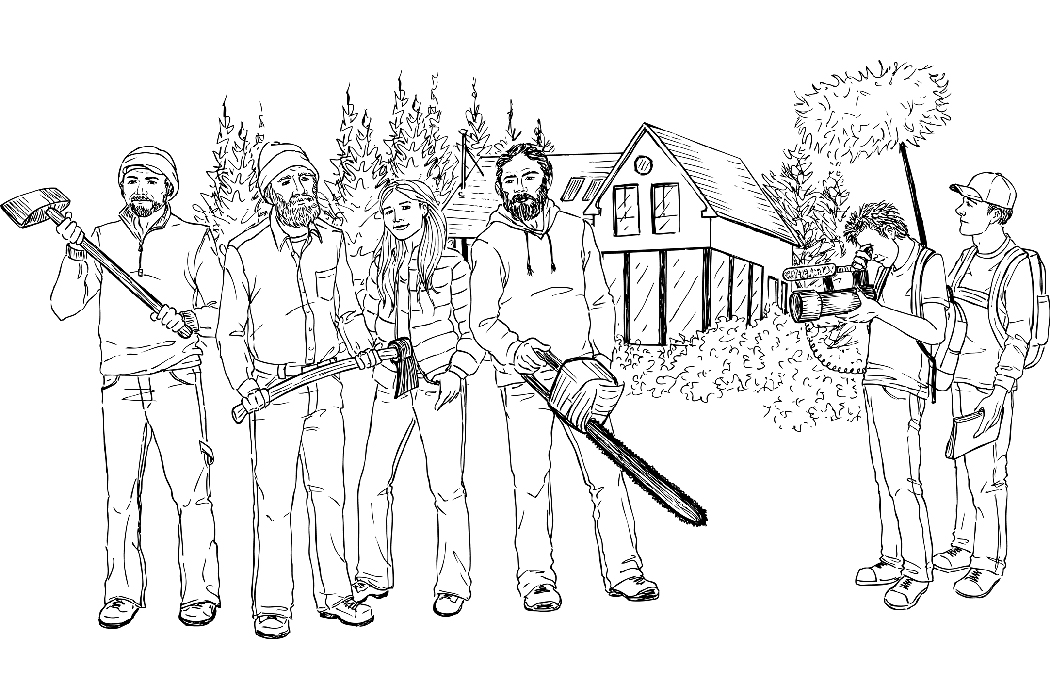 From the April/May 2017 issue of Down East magazine

[cs_drop_cap letter=”O” color=”#000000″ size=”5em” ]n a chilly afternoon, homebuilder Chase Morrill crouches in the crawlspace beneath a slim A-frame in Carrabassett Valley, installing an electric water heater. He calls this rustic house
“The Bucking A,” a nickname bestowed by the two hapless, college-age brothers who built the place in the ’70s. “There’s the clean version of the story, which is that every time the brothers would get some of the ‘A’s to stand up they’d buck in the wind and fall over,” Morrill says. “And there’s the other version, which is that the framing was just such a bucking pain in the butt to work with.” When Morrill and his family bought it, in 2015, “it was rotting into the ground.” He started rehabbing the building last year — hoisting it onto a better foundation, creating space for the water heater, and adding a dormer and pinewood paneling — just in time for an episode of his DIY Network show, Maine Cabin Masters.

Carhartt-clad, with a strawberry-blond mop and a heavy beard, the 39-year-old Morrill looks every inch the backwoods contractor, but he’s an unlikely protagonist for reality television. His Wayne-based Kennebec Property Services doesn’t have a website, and he has no social media presence of his own. Potential clients often track him down via his wife or his team. So when he heard that a production company was looking for a Maine crew that renovates old cabins, it was curiosity, not marketing potential, that compelled him to apply. He filmed a pilot at a pondside camp in Vassalboro, DIY picked up the show for a 10-episode run that ended in March, and a second season starts shooting soon.

Morrill plays the straight man in a jovial cast that includes his sister, her husband, and childhood buddies from the Augusta-Gardiner area who go by sobriquets like “Jedi” and “Dixie.” One friend, Lance Gatcomb, has a repertoire of camera-friendly antics like relaxing in a hammock with a bag of Cheetos or doing doughnuts in a motorboat while the others work. “That’s really how he rolls,” Morrill says. “Everything we’re doing on the show is real, but the editors piece things together to make their own storyline. A small hiccup becomes: ‘Oh no, the generator stopped working! What are we going to do?’ ”

It’s a challenge, Morrill adds, to balance “big wows” that producers crave with homeowners’ practical needs — installing spray-foam insulation, for instance, doesn’t make great television. Amid tight budgets and short time frames, he focuses on nuts and bolts, and when it’s time for aesthetic flourishes, he lets Yankee frugality guide him. At his own camp, he sources almost everything from used materials hoarded over the years: salvaged-wood doors, brightly painted furniture, and open shelving on mismatched metal brackets.

“If we weren’t doing this on TV, we’d still be doing this,” Morrill says, wriggling out from the crawlspace and gesturing at the A-frame. The siding sports a fresh coat of sky-blue paint and a wooden sign emblazoned with the camp’s semi-profane name. A neon-green door provides an exclamation point. “If the show gets picked up for more seasons, great. If it doesn’t, great. There’s no shortage of work.”