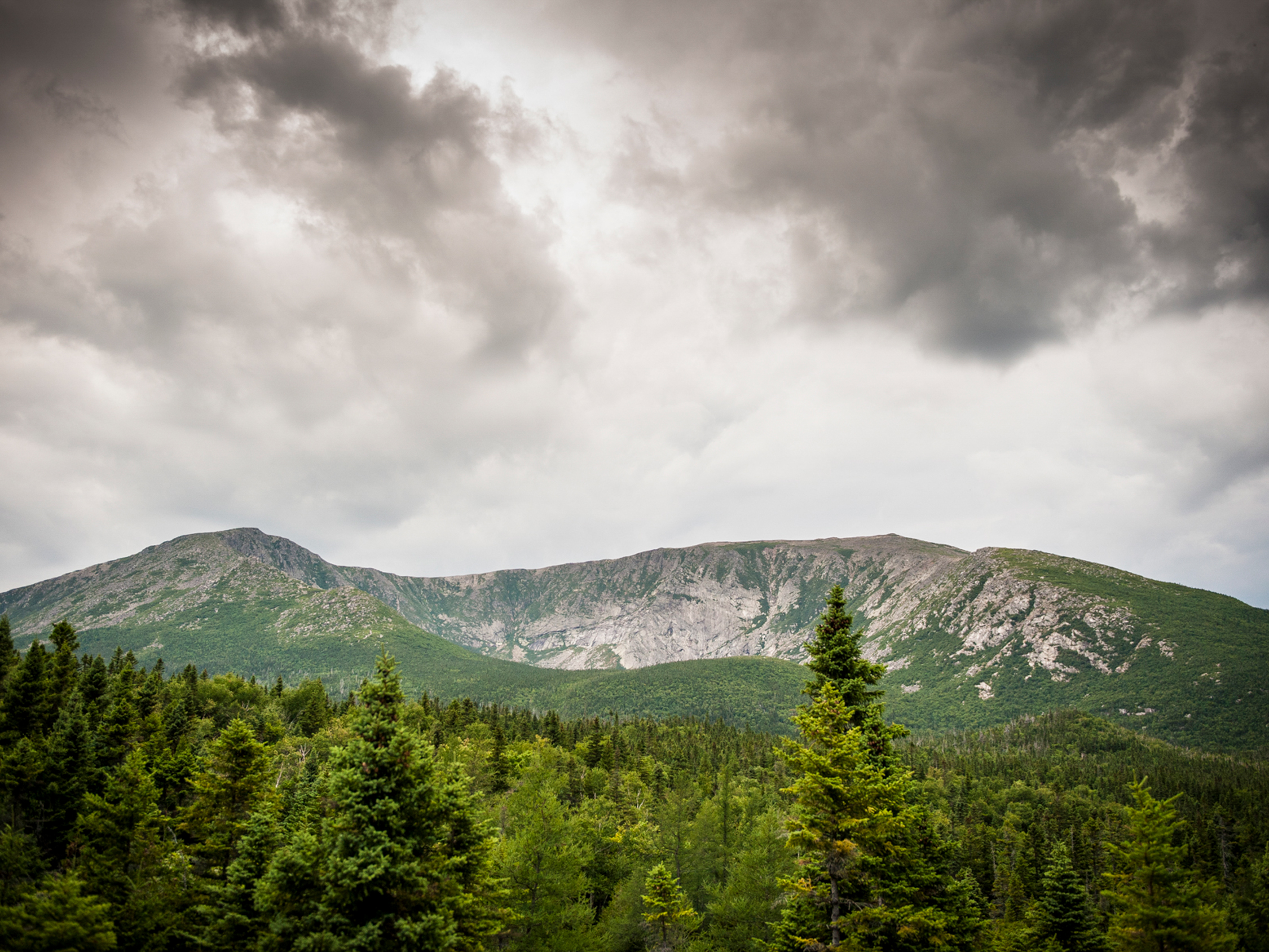 The Insider’s Guide to the Katahdin Region

Maine’s north country is a vast and varied wilderness playground. We’ll give you the lay of the land.

Even if you’ve never set foot in New England, you probably know Katahdin by its reputation: Maine’s highest peak, the storied terminus of the Appalachian Trail, the spot where Thoreau had his melodramatic wilderness epiphany. You might not know that a hiker can’t simply show up at a trailhead there and start hoofing it up the mountain. Or that Katahdin isn’t found, as some reasonably assume, at Katahdin Woods and Waters National Monument, designated amid some controversy at the end of President Obama’s second term (it’s next door). You almost certainly wouldn’t recognize the names of the other neighboring parks and preserves — each administered by a different outfit and governed by different rules — that together make the Katahdin region arguably the East Coast’s finest wilderness-recreation bloc.

And so, a primer. The patchwork management of Maine’s wooly north woods can be confusing for a first-time visitor. Here’s what a would-be Thoreau needs to know.

What’s there: Mile-high Katahdin, for one. More than a half-dozen intersecting trails reach its summit, called Baxter Peak, most of them above treeline for miles and requiring some scrambling or climbing on iron rungs. AT thru-hikers start or finish their trek on the mountain’s western slope, but the showstopper is the eastern approach called the Knife Edge, a boulder-strewn ridge walk of a just over a mile where the mountain’s spine is sometimes all of 3 feet wide, falling away 2,000 feet on either side. Less exhilarating but equally sublime is Chimney Pond, tucked into a cirque on the mountain’s north side, near a cluster of coveted backcountry lean-tos.

But there’s more to Baxter than Katahdin. The 330-square-mile wilderness park encompasses more than 40 mountain peaks, backcountry ponds full of wily native brook trout, and a handful of idyllic cabins and campgrounds — all accessed by one gravel road and some 220 miles of trail. One of Maine’s most underrated hikes is the Traveler Mountain Loop, near the park’s north entrance, which stays above treeline for more than half of its 11 miles. Topping out at Traveler’s 3,551-foot summit, it has much of Katahdin’s grandeur and a fraction of its foot traffic.

Who runs it: The state, with limitations. Maine’s governor in the early 1920s, Percival Baxter, wanted the state to acquire and protect Katahdin and its surroundings. His initiative failed, but after leaving office, he spent 30 years buying the land himself and deeding it to the people of Maine. So while Baxter is a state park in name, it exists outside of Maine’s park system, legally bound by deeds forbidding anything that might intrude on its wilderness character.

Getting in: Entrance is free if you’re in a car with Maine plates; it’s $15 otherwise. Where things get tricky is if you want to hike Katahdin. Unless you’re waking up inside the park (campsites and cabins reserve months in advance), you’ll need a day-use parking reservation — a DUPR, or “dooper,” in Baxter parlance — to claim a space at a Katahdin trailhead. Non-residents can get a DUPR online for $5 starting two weeks before a planned trip. On the morning of your DUPR, you must be at the park’s south entrance by 7 a.m. — at 7:01, your space goes up for grabs to the DUPR-less hopefuls who often hover outside the gate. Once the park admits enough cars to fill the trailhead lots, Katahdin has reached capacity, and you’re looking for an alternate hike.

Know before you go: Baxter reopened recently for day visits, but there’s no camping in the park until at least July. Baxter has no cell service and no facilities with WiFi (or electricity, for that matter). The entrance gates are within a few miles of campgrounds with stores, but you’ll find nothing for sale inside the park, so come in prepared. Pets are forbidden, and kids under 6 can’t go above treeline — rangers will enforce both rules. Some trails have rather conservative cutoff times, and rangers may turn you around if you’re caught hitting the trail too late in the day. Baxter is a bit of a rule-happy park, and it pays to read up before heading in.

What’s nearby: The recovering mill town of Millinocket, an AT trail town where you can gear up and eat amazing donuts at the Appalachian Trail Café, admiring thru-hikers’ signatures on ceiling panels. Lodging in town is mostly budget motels, with a few campgrounds and lodges clustered outside the park entrance, including the sprawling New England Outdoor Center.

What’s there: Katahdin’s forested foothills, several of them bald-topped, their summits accessed along 30 miles of the International Appalachian Trail. Mountain bikers come for a few dozen miles of old forest roads, and paddlers watch for moose along the East Branch of the Penobscot. The monument also has some of the planet’s starriest skies, as recently certified by the International Dark-Sky Association.

Who runs it: The National Park Service, after President Obama’s Interior Department accepted a gift of 87,500 acres from the Mainer cofounder of Burt’s Bees.

Getting in: As of yet, the monument has no entrance stations, so there’s no fee. Camping is free too, available on a first-come, first-serve basis in a handful of primitive sites and lean-tos scattered throughout the park. Katahdin Woods and Waters abuts Baxter to the east, but it’s a wilderness border — there’s no entering one park from the other by car.

Know before you go: As a new NPS unit, the monument is still light on frontcountry attractions, other than a 17-mile scenic-driving loop that has overlooks and interpretive displays but will tax any lower-clearance vehicle (as will all the monument’s roads). No road connects the monument’s north entrance to its south entrance, and it’s a 90-minute drive between them on roads outside the park, so seeing the whole place requires some trip planning. As in Baxter, cell service is nil. Leashed dogs are welcome, and there is next to no ranger presence.

What’s nearby: A rural stretch of Maine, without much for amenities. You can get surprisingly good barbecue at Flatlanders in Patten, then check out a replica 19th-century logging camp at the Patten Lumbermen’s Museum. Near the monument’s north entrance, Mount Chase Lodge is a mellow old sporting camp that serves incredible family-style meals in non-COVID times (and takeout for now).

What’s there: Some 16 miles of crushed-stone bike paths (ski trails in the winter) along the East Branch of the Penobscot River, just south of the national monument. It’s maybe the most manicured trail system in New England where bikers still have to watch out for shambling moose and black bears.

Who runs it: A philanthropic foundation set up by a retired finance titan who bought the former timberland and funded construction of the trails and a pair of “warming huts” that look like small national park lodges. The private park opened just last year.

Getting in: Park in a lot right off the paved state highway, sign in at a visitor center that may or may not be staffed, and hit the trail. There is no fee.

Know before you go: Ordinarily, Penobscot River Trails has a fleet of mountain bikes and kayaks (and in the winter, skis and snowshoes) to “rent” by donation, although the rental program is on hold during the pandemic. No dogs, ebikes, or camping.

What’s nearby: Not much! Medway, the next town south, has camping, tackle, and the rare lobster-roll cart 100 miles inland.

What’s there: Some 46,000 nearly roadless acres of lakes and ponds, most connected by well-maintained portage trails and dotted with lakefront campsites. Also, some stands of old-growth forest, 15 miles of the Appalachian Trail, backcountry ice caves, and so, so many loons.

Who runs it: The Nature Conservancy, which acquired the property in 2002 from Great Northern Paper Company, once Maine’s largest landowner.

Getting in: In contrast to Baxter, Debsconeag is little regulated, with no permits, reservations, or fees. (No dogs, though.) Campsites are first come, first serve. Access is via a handful of trailheads and three carry-in boat launches at the edges of the preserve.

Know before you go: As elsewhere, don’t count on cell service. Mountain bikes are verboten. You’ll want a vehicle with decent clearance to access the boat launches.

What’s nearby: The AT leaves the northeast corner of “the Deb” right next to the Abol Bridge Campground and Store, a clutch outpost for last-minute tent stakes, fishing flies, and beer, as well as a staging area for northbound thru-hikers about to launch their final push towards Katahdin. It’s also a base camp for whitewater rafting trips on the West Branch of the Penobscot, which separates Debsconeag from neighboring Baxter.

Beyond the Katahdin Region: The North Maine Woods

Wait, isn’t it all the north Maine woods? Well yes, but head north or west along the rutted logging roads that spider out from the Katahdin region and sooner or later you’ll reach a gated checkpoint run by North Maine Woods, Inc., which administers recreational access to some 3.5 million acres of forests, mountains, lakes, and streams in the state’s undeveloped northeast corner. Most of the land is owned by commercial timber interests, but there are hundreds of remote campsites back there, plus a few sporting lodges and housekeeping cabins catering to anglers, hunters, and paddlers. Among other things, North Maine Woods regulates access to the 92-mile Allagash Wilderness Waterway, one of New England’s all-time classic river trips. The Allagash has its own fee structure, but out-of-state visitors elsewhere in the North Maine Woods can expect to pay a $16 entrance fee, plus another $15 for each night of camping.

This summer’s travels require some extra prudence: staying informed of health advisories and closures, observing respectful distancing, being willing to adapt your plans. But with a little care and caution, you’ll find the Maine outdoors as welcoming as ever. Maine businesses are adapting their plans as the summer progresses — call or check the web before you show up. As of July 3, travel in Maine is open without restriction to residents of Maine, New Hampshire, Vermont, New York, Connecticut, and New Jersey. Visitors from any other state must follow quarantine and/or testing guidelines and complete a Certificate of Compliance form. Read up on the state’s Keep Maine Healthy plan for details. 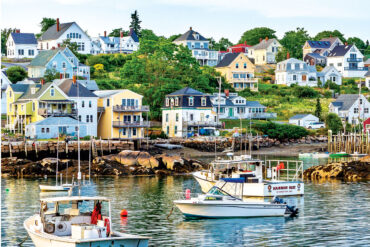 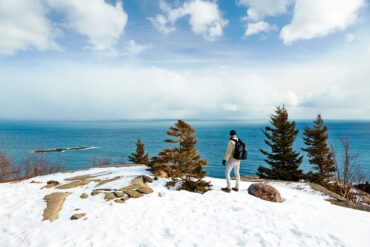 How to Enjoy Acadia in Winter 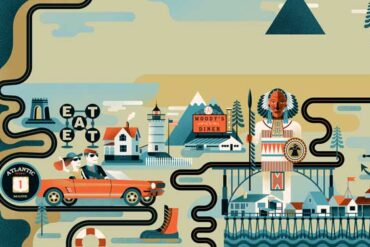