Ben Ford traveled light when he moved to Maine from the San Francisco Bay area in 1995, but there was one possession he had to go back for: the 22-foot Santana sailboat he’d bought cheap at age 16. He crossed the country twice to retrieve it and tow it home, and for years to come, he sailed his Santana 22 on Casco Bay and Great Pond in the Belgrade Lakes. When he finally sold the boat in 2010, Ford kept the jib and the mainsail, gently folded them, and placed them on a shelf, where he figured they’d remain indefinitely.

Of sailcloth Sea Bags has kept  out of landfills since 2006

Why keep them? “Pure sentimentality,” says Ford, now 44 and a labor and maritime attorney in Portland. “That boat meant a lot to me. The sails tell the story of some really great times.”

But when Ford got wind of the Sea Bags Sail Trade Program — the cornerstone idea behind Maine retailer Sea Bags, which makes stylish totes and accessories from recycled sailcloth — he knew there was a better way to honor his boat and still hang onto a piece of it.

So Ford’s became two of the 5,500 or so sails brought into Sea Bags last year. Many came through the doors of a Sea Bags retail shop (the 11-year-old company opened its 11th store in May, in Camden). Some were fetched by the Sea Bags sail acquisition team, which logs tens of thousands of miles each year, collecting sails and hearing owners’ stories. Other sailors ship their retired sails from all across the country, motivated by a desire to keep the fond old fabric from moldering in a basement — or, worse yet, a landfill.

“Prior to Sea Bags, a lot of people were just throwing old sails away,” says Sean Powers, Sea Bags’ sail trade acquisition manager. “But the material’s durability is what makes it such a great sail bag — it doesn’t break down naturally. So turning it into something fashionable and enduring means saving sails from ending up in garbage pits.”

Depending on the condition and size of their sails, many sail traders opt to swap for a bag custom-made from the sailcloth they’ve supplied. Traded sails run the gamut from the compact canvas of racing dinghies to the voluminous sails of the Athena, one of the world’s largest private sailing vessels (the sails had to be unfurled at Portland’s Eastern Promenade for Sea Bags’ sail cutters to make their initial cuts). Every sail is cut by hand, and meticulous cutting and stitching preserves features that make each sail — and therefore each bag — unique. 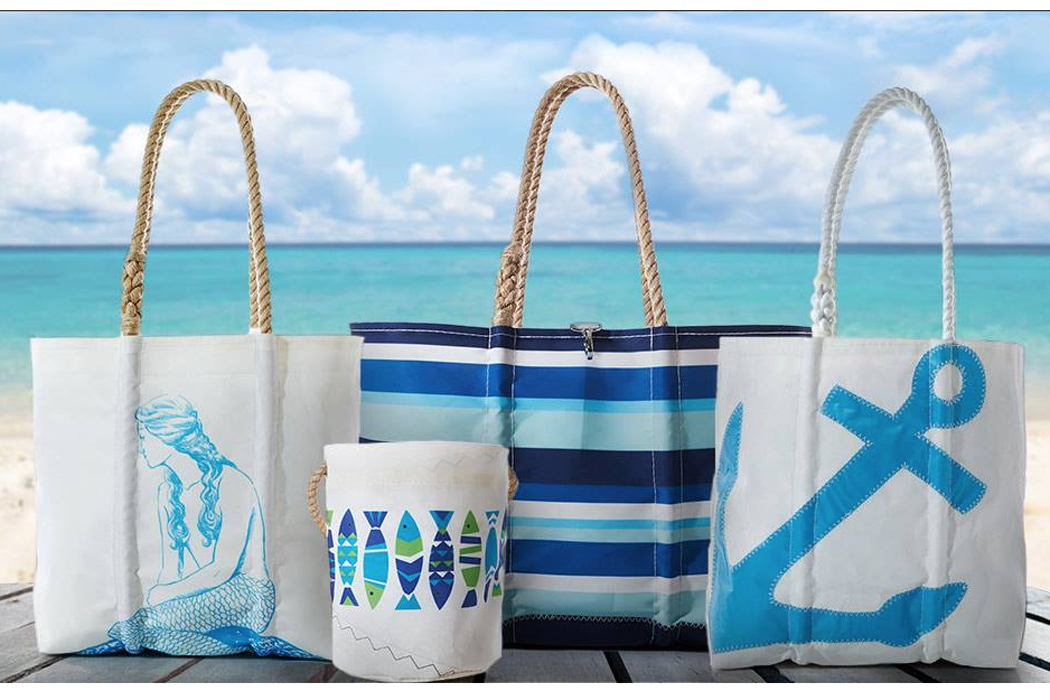 “It really is a process of being on hands and knees with a pair of scissors,” says Powers, “looking for stitching that’s going to look great and preserve the life of a bag, plus grommets, colorful fabric strings called telltales, even rust stains and weather marks that show a bag’s authenticity.”

The most prized details? Sail insignias — letters, numbers, and symbols indicating a boat’s class or make. Sailcloth with such emblems is set aside for Sea Bags’ Vintage Insignia line. It’s one of these bags that Ford carries now to remind him of his first boat. When he heads out on the water these days, he packs towels, food, and wine in a handsome tote with a weathered, familiar “S 22” on the side.

“I suppose it’s ironic,” he says. “The sails that were with me for all my childhood adventures are still with me for my old-enough-to-know-better adventures.”