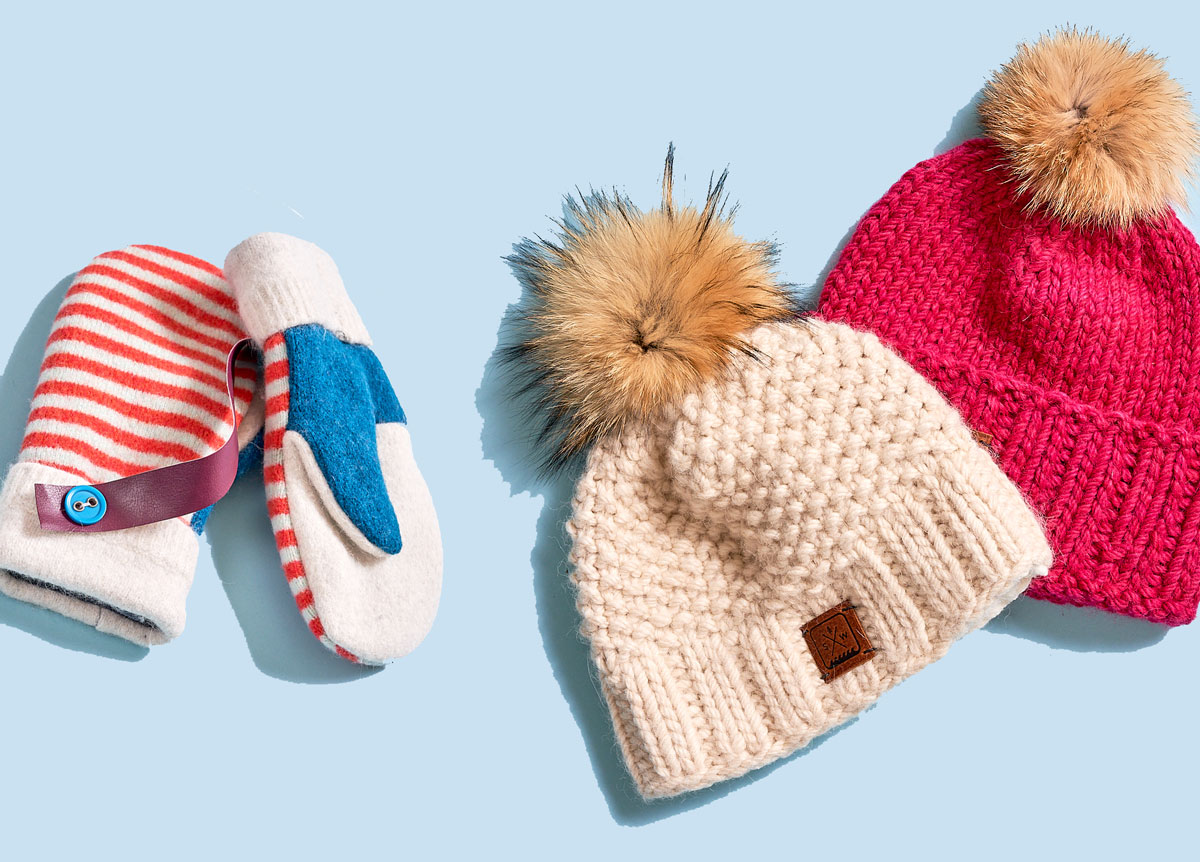 A chance Instagram encounter with a pair of Windham-designed skirted ski pants launched this winter gear guide. If this ingenious, bun-warming garment had been dreamed up in Maine, we wondered, what else could we dig up in our frozen backyard? Enough, it turns out, to outfit you, nearly head to toe, for a pandemic winter where even snow-worshipping Mainers are upping their outdoor exposure — on the slopes, on hiking trails, and around ice-fishing holes and fire pits. See you out there!

With the launch of Benoit’s Design Co. in 2014, Greg Benoit revived a family entrepreneurial legacy — twice-great-grandfather A.H. started Maine’s long-running Benoit’s department store chain in 1890. Today, Greg and his wife, Christina, handcraft décor and apparel in their Westbrook factory, including this must-have for combatting cold temps and airborne viruses. $25. benoitsdesign.co

“A cold butt while sitting on the chairlift at Sugarloaf” prompted Windham’s Cathy Streifel to hunt for a sporty skirt to layer over ski pants. Finding none, she patented her fleece-lined, skirted snow pants in 2019. A loose, flattering A-line makes them suitable for active pursuits — and outdoor dining. $139.99. pyxie.co or via the Kittery Trading Post, kitterytradingpost.com

Frustrated with ice-fishing traps that fell apart after a few seasons, Tim “Jack” Jackson began making and selling his own in 1979. He later moved his basement operation to a 6,000-square-foot Monmouth workshop/retail store, where the company, now owned by Shawn Norton, offers 15 different traps in various colors and woods.
From $42. jacktraps.com

Inspired by her mother’s penchant for repurposing old clothes, Marilyn Robertson’s York-based Jack & Mary Designs (named for her parents) transforms 1,000-pound bundles of thrift-store sweaters into handsome wool accessories. That holey argyle you’ve been hanging onto? The company can give it new life too. Cashmere circle scarf, $70. jackandmarydesigns.com

In 2014, Monmouth middle-school science teacher Karenina Cooper took some adult-ed classes in hopes of finding a hobby. “Beekeeping, not for me,” she says. But a course on turning wool sweaters into mittens resonated. Now, she churns out fleece-lined pairs, from mostly thrifted material, on her hand-me-down Brother sewing machine. $27.95. maine-lywoolmittens.com

Ellsworth’s Anna Pazereckas keeps a snapshot of herself as a toddler in Germany wearing a green poncho with appliqué mushrooms and a matching pixie hat. Today, mushrooms show up on rompers and pocket dresses in her German-inspired children’s line, and conical boiled-wool caps are a signature. From $35. getcuteknits.com or via Island Artisans, islandartisans.com

He carved his first turns at Lost Valley; she at Sugarloaf. Now, Freeport husband-and-wife team Phil and Amy Taisey design custom skis for Maine’s mixed-bag terrain. Phil puts his background in engineering and woodworking to use in handcrafting each pair, while Amy, a Carrabassett Valley Academy grad, handles marketing. $1,200. amalgamskis.com

A star-studded pine on Rogue Life’s sporty clothing, inspired by owner Mark Rodrigue’s Lewiston tree farm, telegraphs local pride. He created the line as an offshoot of his Rogue Wear athletic bag manufacturing company, started by his parents as a trophy business in 1969. “Rogue?” His childhood nickname, after NHL goalie Rogie Vachon. $55. shoproguewear.com

Mt. Blue High School running coach Kelley Cullenberg was rocking printed tights “long before they were popular,” says Sarah Doscinski, the district’s middle school running coach, who was on Cullenberg’s teams. But they “fit funny,” so the two designed their own Maine-stitched pairs, including fleece-lined thermals in 11 Cullenberg-approved motifs. $95. spandits.com

Wane Loring learned to craft traditional Wabanaki pack baskets from his dad, a master basket weaver. As an adult, he subbed more durable synthetic splints for ash and field-tested his baskets with hunters. The result? A line of five packs with lifetime warrantees, hand-woven in his Old Town workshop. From $94.95. loringoutdoors.com