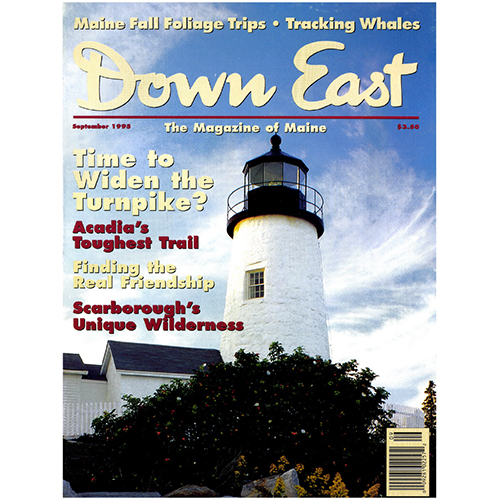 Opinions and advisories on hot dogs, shipwreck discoveries, and a Portland coffeehouse with international connections.

One of the wildest places in Maine sits smack in the middle of Portland’s busy suburbs. How did  it ever escape development? By Paul Karr and Jeff Clark.

Which One is Zorro?

‘Let Every Hour Be Filled to the Brim’

A one-man perpetual-motion machine in his lifetime, Jonathan Fisher is  still a presence in Blue Hill today. By Joseph E. Brown.

Despite warnings, thousands each summer scramble up the sheer eastern face of Acadia’s Champlain Mountain. By Andrew Vietze.

Dad, Me, and Minnie Canarnie

On our Maine vacations, it was my imaginary friend who set the pace.  A reminiscence by George Carey.

Hollywood didn’t think this harbor looked authentic enough to use in the current hit movie that is ostensibly set here. But no one around town is complaining. By Joseph E. Brown.

Part of the slow process of becoming a Mainer is learning what grows here without any coaxing. By Richard Grant.

A special 48-page guide to the splendors of autumn in Maine, complete with maps and itineraries.

I began to wonder what this place would be like to my son’s sons. Had all of the changes that I have made (they are called “improvements”) increased the value of the place but at the expense of its soul? By Caskie Stinnett.

The Talk of the Turnpike

Sis and the Salmon