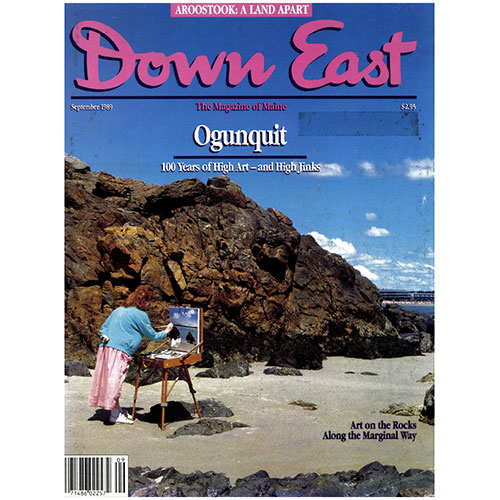 Having a Wonderful Time!

Long before it became fashionable as a summer resort, Ogunquit served as an artists’ colony — and what artists they were! By Lyn Riddle.

When not playing golf, fishing, or partying, Ogunquit’s summer artists managed to create some first-class art. By Beth Crichlow.

Spurred on by his current champions, Dan and Tony, trainer Dick Wallingford is still going strong, after four decades on the pulling circuit. By Michael Brosnan.

Resurrected from years of neglect, Hamilton House in South Berwick displays an eighteenth-century charm that would be unrecognizable to its builder. By Ellen MacDonald Ward.

Near the end of the Great Age of Sail, Edna Hysom watched her sea-captain father go  off on an ill-starred voyage from which he was never to return. By Nan Lincoln.

When Dorothy Spero founded a research station at West Quoddy Head, she didn’t foresee that over the years the staff would save hundreds of marine creatures, from shore bird to whales. By Bunny McBride.

Visitors to mid-coast Maine have been writing nice things home about the Samoset Resort for exactly one hundred years.

Candlemaking in Rockland, truffles from Norway, and woolen capes from Freeport — three more success stories  from the Pine Tree State.

I believe in nature the way some people believe in New York or wealth or power or science or the intellect or the Bible. By Caskie Stinnett.

The Talk of Swan’s Island

Don’t Mess With an Islander

Thanks, But No Thanks

A Year for the Birds

Maine in the Early Republic: From Revolution to Statehood

The Orneriest Man in South Casco