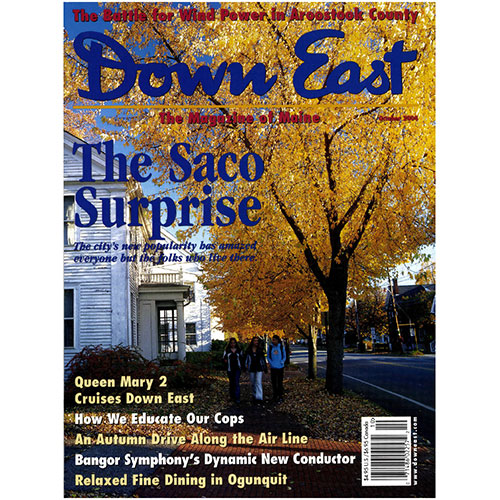 This often-overlooked  litfle municipality only fifteen minutes south of Portland has an unshakable sense of itself and an upbeat outlook. No wonder people are flocking to it. By Jeff Clark.

Queen for a Day

The newest, largest, and most expensive passenger liner afloat is paying a visit to Bar Harbor and Portland this  fall – and everyone’s invited to the parties that are being thrown in her honor. By Joshua F. Moore.

Autumn on the Air Line

What was once Maine’s wildest highway is now its most spectacular, as a selection of color photographs by Kevin Shields suggests.

At the Maine Criminal Justice Academy all the state’s law enforcement officers — from state troopers to game wardens — learn what we expect of them. By Edgar Allen Beem.

Signs of the Maine Zodiac

It’s uncanny how accurate the Down East astological chart is at predicting personality traits. Want proof? Check out these horoscopes scientifically formulated from the lives of notable Mainers.

A couple  with a bit of an aversion to B-and-Bs has turned a midcoast manse into an intimate, but not overbearing, hideaway for people  just like themselves. By Andrew Vietze.

As a series of photographs made a century apart shows, many of Maine’s towns and villages are still very recognizable today after a hundred years of progress.

When the Bangor Symphony Orchestra premieres a brand-new symphony about the Penobscot River this month, the proudest and most enthusiastic person in the hall will be the man holding the baton. By Brian Fiske.

North by East: Taking a Chance

Opinions and musings about Powerball’s arrival in Maine, nature sightings in Baxter, and an unanticipated problem on the newly widened turnpike.

The Talk of Mars Hill: Clash of the Titans

A tantalizing wind-power proposal in Aroostook County has pitted Maine’s two largest environmental organizations against each other. By Jeff Clark.

Voting for the tax cap will make everyone feel good — until they see the utter havoc  it wreaks, opines the Ellsworth American. Plus other editorials on Scarborough’s continuing battle with urban sprawl, a misguided new push for a statewide pre-kindergarten program, Maine’s latest employment figures, and questions raised by the Passamaquoddy Tribe’s proposal for a liquefied natural gas facility in Washington County.

Inside Maine: Acadia by Bike

Autumn is the time to explore the famed carriage roads on a two-wheeler. Plus tips on off-season rates at one of the state’s finest hotels, tasty calzones in Millinocket, interesting art glass in Frankfort, a home-building course, a conference about the Gulf of Maine, and information for small woodlot owners. By Andrew Vietze.

Reinventing a Route 1 landmark is the latest venture for one of Maine’s busiest restaurateurs. By Michaela Cavallaro.

Calendar of Events: Out and About in October

Concerts, art exhibits, performances, and more than a few fairs will keep you hopping this autumn.

What’s in a Picture?: Leap of Faith

Have the good people of York gone mad? An early 1940s photograph might make you jump to that conclusion. By Joshua F. Moore.

The Pine Tree State made a big splash at the 1964 World’s Fair. By Harvey Howells.

Cover: A neighborhood in Saco, by Dean Abramson.