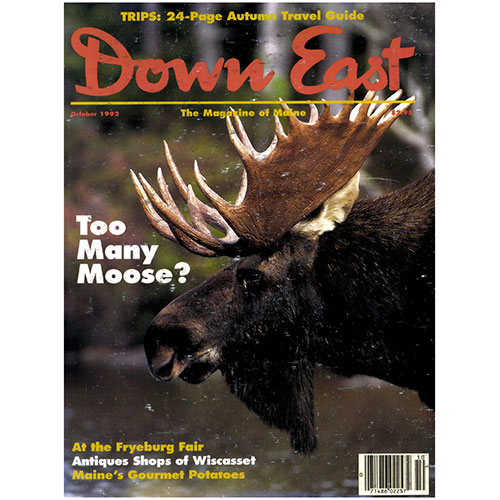 Monarch of the wildemess, Maine’s most magnificent mammal is thriving — to the point where pressure is building to better ‘manage’ the herd. By Sarah Scott. Photographs by Robert Villani.

The town that calls itself ‘Maine’s Prettiest Village’ may also be the state’s premier antiques emporium. By Ellen M acDonald Ward.

The Heathers of October

The frost that wipes out summer’s last blooms also turns these modest little shrubs into a blazing autumn tapestry. Greta Waterman, of Freeport, tells how. By Jane Lamb.

Maine’s wealthiest citizen, Asa Clapp shored up the U.S. Treasury during the War  of 1812 — while serving as an army private. By William David Barry.

On North Haven Island in Penobscot Bay, Chellie Pingree has created a nationwide mail-order sweater business — and leamed a lot about living in a tight-knit community. By Sarah Scott.

A special 24-page supplement devoted to the joys of searching out the best that Maine autumn has to offer.

There are  those who march through life tossing aside objects that have no immediate function but I am not one of them. By Caskie Stinnett.

The Talk of Friendship

The Sage of Friendship