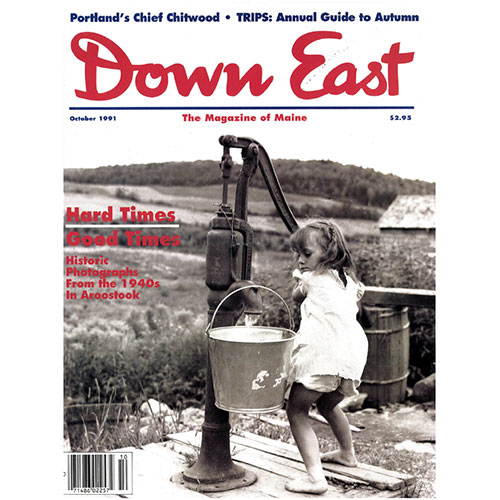 Two gifted photographers captured the trials and triumphs of the Great Depression in the St. John River Valley. Photographs by Jack Delano and John Collier, Jr.

Thirty years a policeman, Mike Chitwood creates a stir by telling it like it is. By John Lovell.

Call of the Sea

Unlike many a Maine lad who went to sea in the early 1800s, Rocklander Pearl Spear left a revealing account  of his early days.

Autumn’s turn of season brings the pause that refreshes to the Maine North Woods. Photographs by Richard Procopio.

For almost three decades, Rockport’s Sail Loft restaurant has been luring discriminating diners with fine food and an unrivaled view. By Beth Crichlow.

After a singular career at the helm of renowned Camp Chewonki, Tim Ellis exits with a smile. By Jeff Clark.

Centerpiece of the Maine State Museum’s new display is an ancient larder built by the inhabitants of northwester Maine. By Ellen MacDonald Ward.

A special sixteen-page supplement devoted to the joys of searching out the best that Maine autumn has to offer.

Personally, I resent the patronizing air of bees, their treacherous swarming and their sullen dispositions, and if  it weren’t for honey I think you would find more signs of zeal creeping into my comments on the terrors of bee communism and the unhappy ways of politics in bee colonies. By Caskie Stinnett.

The Talk of Old Town

Cover: Doris Daigle was photographed by Farm Security Administration photographer John Collier, Jr., pumping water from a well on her family’s Fort Kent  farm in the summer of 1942. Today she operates a restaurant — Doris’ Cafe — in Fort Kent under her married name of Doris Daigle Paradis.