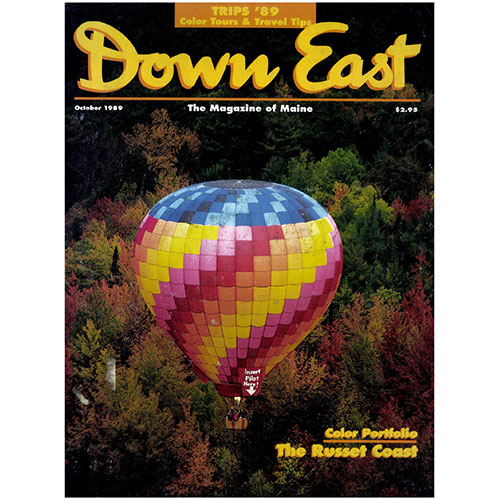 Born to wealth and privilege, daughter of a Maine governor, Margaret Gardiner lives in a four-room house in rural Woolwich, reads  MAD magazine, and raises championship Morgans. By Lyn Riddle.

The torching of Bath’s Old South Church was only one of the many anti-Catholic outrages fostered by the Know-Nothing movement in mid-nineteenth-century Maine. By William David Barry.

Potter Paul Heroux prods, pinches, and paints his ceramics — and discards almost as much as he keeps. By Beth Crichlow.

In terms of autumn foliage, the fireworks may be inland, but the coast displays a subtle beauty all its own. Color portfolio by  Alan Nyiri.

Gadfly geographer George Carter claims to have convincing proof that the Norse and Irish — and even the Romans — were regular visitors to Maine shores long before Columbus. By Jeff Clark.

In 1882, the great aesthete dropped by to speak a few words on behalf of Beauty. By Tom Verde.

Carrying the Mail By Sail

Neither gale nor calm nor gloom of fog stayed Captain William Humphrey from the completion of his appointed rounds on the Monhegan mail run. By Laura S. and John A. Saunders.

A special 32-page supplement devoted to the off-season joys of vacationing in the Pine Tree State — from leaf-peeping to downhill skiing.

The occasions when a man feels it necessary to confront his state government should be rare and exceptional since the relationship between the governing and the governed is so precariously poised. By Caskie Stinnett.

The Talk of Sangerville