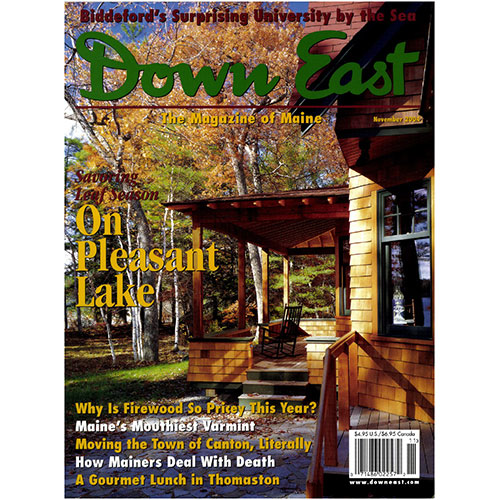 A striking new cottage on Pleasant Lake is built on the site of a former camp for kids — and ironically it was designed to someday be a retirement home. By Meadow Rue  Merrill.

Ed Blake and his family can cut twenty cords of wood on a good day — but even at that rate they can’t keep up with the demand this year. By Frank Andrews.

The Maine Way of Death

All across the state, the way Mainers deal with a death in the family is changing, but tried-and-true local funeral homes are still right at the center of things. By Elizabeth Peavey.

A Beastie with Attitude

Even if you don’t understand the words that come out of a red squirrel’s mouth, you know they’re not pretty. By John N. Cole.

Peering into the Past

Looking for a picture of Boothbay Harbor  in 1890? Your best bet is the Maine Memory Network, an astounding new “virtual” museum. By Joshua F. Moore.

Ever motored past this remarkable old fiIling station? See if you can recognize the location. Photograph by Brian Vanden Brink.

University by the Sea

Less than a half hour south of Portland lies the main campus of the University of New England, a fairly young school with health care and marine biology programs that have already won it recognition outside the state. By Edgar Allen Beem.

A magnificent show at the Portland Museum of  Art this fall spotlights a collection of magnificent antiques usually seen only by visiting dignitaries inWashington, D.C.

A photograph from Bangor in the mid-1920s suggests certain visitors to the Pine Tree State in those days thought big. By Joshua F. Moore.

Opinions and advisories on dealing with deer herds offshore, how Mainers have voted on various historic issues, and a gift to all Mainers from our Muslim friends.

The Talk of Canton: On the Move

Incredible as  it seems, the little town of Canton is pulling up stakes and heading to higher ground. By Jeff Clark.

A new study suggests that parks and public lands actually increase local tax revenues, according to a recent editorial in the Waldo Independent. Plus other opinions on a new attempt to circumvent Maine’s billboard law, progress with the laptop-computer program, and a sobering proposal to eliminate 3,500 of the best jobs in Maine.

A Biddeford company is keeping alive a traditional Maine holiday favorite by making and canning authentic mincemeat. Plus tips on a nifty program for kids at the Portland Museum of Art, the Maine Forest Service’s very useful Web site, WERU’s new global accessibility via the Internet, a beautiful preserve not far from Acadia National Park, and party platters that could lighten your holiday load. By Andrew Vietze.

This heavenly hole-in-the-wall is more bistro than breakfast joint. By Virginia Wright.

Down East  Bookshelf: A Time of War

A new novel takes an intimate look at the American Revolution in Maine. By Richard Grant.

Fall is an ideal time to visit the state’s theaters, concert halls, and museums.

Sometimes a bird in the pond is worth a second look. By Thomas Froncek.