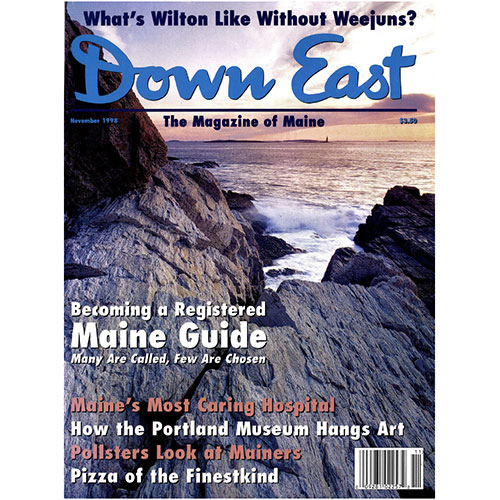 Opinions and musings on a new distinction for a Bailey Island eatery, the challenges of Old Orchard’s truant officer, and fresh Maine crabmeat’s new trendiness.

One of the prettiest towns in Maine faces an uncertain future now that mighty Bass Shoe has pulled up stakes and moved overseas. Sarah Goodyear talked to some residents of the former shoe-making center.

I thought  I had what  it takes to  join the legendary ranks of the Registered Maine Guide, but instead of a badge I got a whole new appreciation of what these consummate outdoorsmen must do. By Andrew Vietze.

The Art Behind the Art

Ever wonder how a museum actually hangs a show? Ken Textor paid a visit to the Portland Museum of Art and was surprised at what he discovered.

The Buzz on the Biennial

Just what the collection of contemporary Maine art on display at the Portland Museum of Art represents is unclear — other than that several Maine artists are still doing fine work. By Edgar Allen Beem.

In any number of  Iittle ways, November conspires to remind us what  it is we cherish about  life in the northeasternmost corner of the nation. By Richard Grant.

Determined to do whatever it takes to make people feel better, the folks at  York Hospital are literally redefining the term “medical care” in Maine. Paul Mann explains their revolutionary approach.

That’s what a Cape Elizabeth couple say to each other virtually every day of the week, as they waltz their way into the rarefied world of competitive ballroom dancing.

Three growing companies around the state are helping to fuel the digital revolution. By Peter Brown.

A snapshot of a  little girl perched on an unusual tree branch recalls a Fryeburg landmark that was once a source of civic pride. By Ellen MacDonald Ward.

Lobster roll literature bas been diverse and inclusive over the years, but to my knowledge the airplane has not played a part in it. By Caskie Stinnett.

The  Talk of Maine