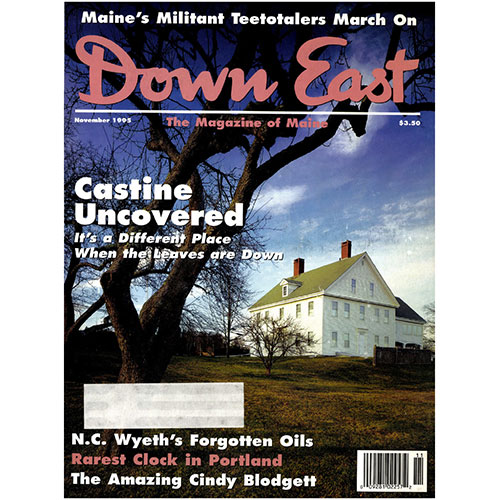 Naked Beneath the Elms

Once the leaves are  off the trees, Castine shows all its graceful nativeness. By Andrew Vietze.

From their headquarters in Portland, the good ladies of the Women’s Christian Temperance Union do cary on. By Edgar Allen Beem.

To Save a Sinking Plane

When we heard an aircraft was down and abandoned off Criehaven, we had no idea whether we could rescue her with just our old lobsterboat. By Steven Waterman.

David Pollock’s flowers never  fail to tum heads — each one is actually carved from wood. By Luann Yetter.

The renowned illustrator paused in his midforties to try his hand as a serious artist. The result was a collection of oils that have rarely been seen before. By Stephen May.

Portland’s First Parish Church clock, one of the rarest in America, has been stopped after nearly two centuries.

Making It In Maine — Kid Stuff

The Case of the Natty Nazis

In November  of 1944, two topcoated strangers looked suspiciously out of place on a dark, snowy road in Hancock. By Mason Philip Smith.

Augusta once fancied itself as something of a movie capital, as an old still photograph recalls. By Ellen MacDonald Ward.

We  live in a period that seems to require that  every surface or siding must have something printed on it, and most of it is advertising. By Caskie Stinnett.

The Talk of Orono