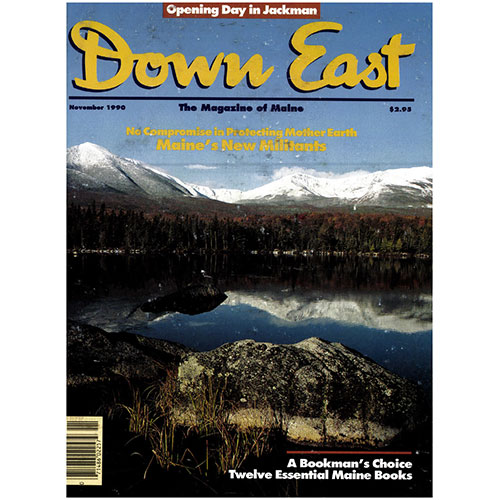 Neighborhood groups are suddenly springing up from Kittery to Aroostook County to fight environmentally questionable proposals ranging from new highways to new power plants — and in some cases they’re already winning. By Jeff Clark.

With a touch of class – and a dash of kitsch — Isabel and AIan Smiles transformed a staid Victorian home into a sophisticated small inn. By Beth Crichlow.

Each year in autumn, there comes a day when the name of the game is deer, and the place to be is Jackman. By Jason Stone.

While many in Sangerville thought rebuilding the local covered bridge was a crazy idea, most were amazed at how the job was pulled off. By Michael Brosnan.

Forging Ahead in Woolwich

Blacksmiths Gerald and Beverly Galuza have been pounding anvils side by side for thirteen years, turning out everything from ship’s fittings to sculpture. By Chase Reynolds.

Island dwellers who sit on the rocks and stare out across the water waste a lot of time following odd trains of thought that start out nicely formed like the contrails a high-flying plane draws across the sky only to have them grow wispy and blurred once they are touched by the crosscurrents of logic and reality and the limitations of human mentality. By Caskie Stinnett.

The Talk of Belfast

Cleaning out the Ell

A Rower for All Seasons

The Tinker of Salt Cove by Susan Hand Shetterly