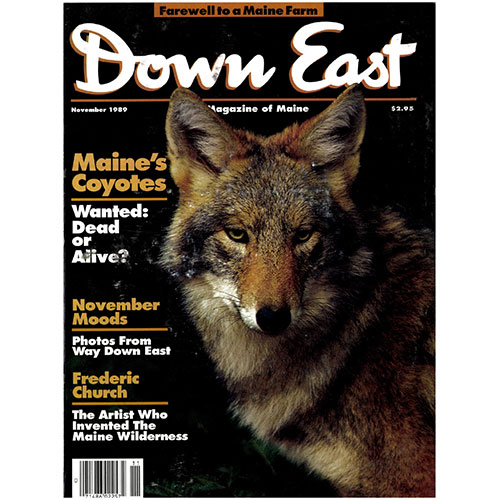 Something to Howl About

In a series of bitterly controversial moves, the state legislature has taken stern steps to control or eradicate the Maine coyote. By Robert Kimber.

After 200 years in Turner, the Princes are now one of the 140 Maine families that are being forced off their land each year. By Lyn Riddle.

Frederic Church, whose works now fetch millions on the auction block, discovered the Maine wilderness  in 1850 — and made it famous. By Stephen May.

Voice of the Valley

Ida Roy has dedicated her life to preserving the Acadian ballads of Aroostook’s St. John Valley. By Ernie Freeberg.

Uncle Ralph was a fourth-class postmaster, but a  first-class businessman. By John Gould.

Weather vanes in Searsport, wool-dyeing in Alna, and mincemeat in Hallowell — three more success stories from the Pine Tree State.

The Talk of Peaks Island

The Joys of Hunting

Time of Wonder by Robert McCloskey

My First Trip to Bartlett Island