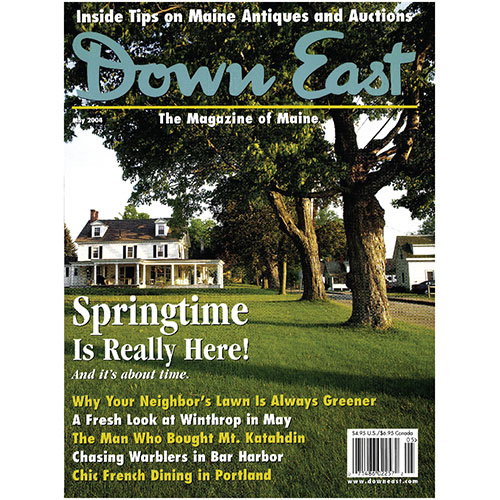 As springtime washes over this little community west of Augusta, many around town agree that 2004 could be a very good year. By Andrew Vietze.

Why Your Neighbor’s Grass Is Always Greener

If your lawn is brown for weeks after everyone else’s has tumed bright green, you can either curse your fate or take a few simple steps to remedy the situation. By Rebecca Martin Evarts.

In the last quarter century an extraordinary group of conservation leaders and organizations has been fighting to preserve Maine’s natural resources, as a quick review of the recipients of the Down East Environmental Award attests.

The Man Who Bought Katahdin

Percival Baxter not only created an extraordinary state park, he singlehandedly launched the whole modem conservation movement in Maine. By Jeff Clark and Edgar Allen Beem.

The Tulips of Belgrade

A certain mid-Maine collection of tulips never fails to bring traffic to a halt at this time of the year. By Meadow Rue  Merrill.

Though very few Mainers have ever seen it, the new memorial in Augusta honoring Maine’s veterans is strikingly poignant. Photo by BrianVanden Brink.

Like the swallows at Capistrano, brightly colored warblers seem to return to Mount Desert Island at the same time each spring – and the town of Bar Harbor has begun to capitalize on the event. By Elizabeth Peavey.

Can you identify this little bridge and the town where it’s located?

Devoid of bright colors or dazzlng glazes, the earth-toned pottery of Swanville’s Jody Johnstone has the look and authority of museum-quality antiquities — with a distinctly modem sensibility. By Stacey Chase.

The Class of Maine

It’s graduation time at campuses across the state, a time to recall some  of the famous people who have graduated from Maine colleges. By Paul Doiron.

In a special section for antique collectors, the editors of Down East visit one of  the largest antique shops in the Greater Portland area, preview some of the top antique shows and auctions coming up this year, and offer a quiz for those who think they know how much Grandma’s old rocker is worth.

Opinions and advisories about an overdue salute to our Acadians, the booty collegians leave behind in Brunswick and Augusta, and a unique sound of spring that fills the air along the coast.

The Talk of Maine: Moving a Landmark

After 185 years in Portland, the venerable F.O. Bailey auction house is leaving town. By Jeff Clark.

An injustice has been done to a young woman living in Farmington, as an editorial from the Lewiston Sun Journal points out. Plus, opinions on the cost of reducing Maine’s tax burden and two different ways of looking at tolls as a means of raising revenues.

Inside Maine: Hanging by the Pool

Beyond Biddeford lies a secret sanctuary at the edge of the sea. Plus, a Stonington spa that offers a perfect Mother’s Day present, a midcoast general store that serves up a “seagull” feast, and a handy guide to Maine campgrounds. By Andrew Vietze.

In the Old Port, a young chef with a French  flair is reaching for the culinary heights. By Michael S. Sanders.

An author who should know better throws everything but the kitchen sink into this meditation on a midcoast scrapyard. By Richard Grant.

Calendar of Events: May Highlights

What’s in a Picture: One Wrong Turn

An arresting old photograph records a mishap that befell a well-to-do Biddeford businessman when he took his fancy Packard touring car for a spin. By Joshua F. Moore.

I Remember: Hot and Heavy

I owe my love affair with a 1920s antique oven to a short little appliance  repairman from Trenton. By James Schwartz.