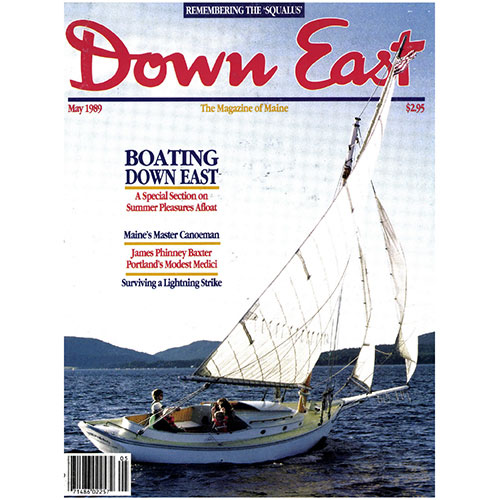 Secrets of the Good Life

According to Jerry Stelmok they include building canoes, raising kids, fishing, hunting — and writing books. By Robert Kimber.

Camping in the mountains of Grafton Notch State Park, three teenage backpackers were hit by a powerful lightning bolt — and lived to tell the tale. By Paul Doiron.

Quickening activity along the coast is reflected in shimmering harbor waters. Color photographs by Daniel Rossborough.

Last Dive of the ‘Squalus’

Attempts to rescue the crew of a sunken submarine off Kittery fifty years ago this month captured the attention of the world. By Carl La Vo.

Landscape murals from an 1811 house in Winthrop are treasured by the Maine State Museum. By Ellen MacDonald Ward.

A Guide to Summer Pleasures Afloat, an annual thirty-two-page supplement by the Editors of Down East.

When I step out of the boat on my island, after an absence of a few months, I have returned home because I live in Maine and this spot is the central core of my entire existence. By Caskie Stinnett.

‘Moratorium’ on the Waterfront

Veteran’s Park, From the Point, and A Soldier’s Disgrace by Don Snyder

The Easting of the Greens

Learning to Drive at Harp School