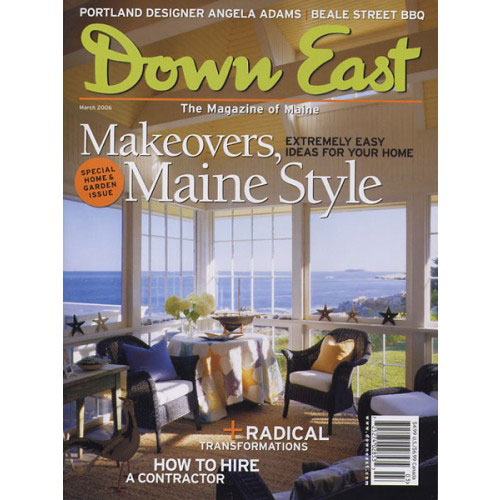 The biggest wave of development in years is about to hit the city’s East End between the Old Port and Munjoy Hill.

How To Hire a Contractor

Here are ten tips on finding the right person for your own Maine makeover.

A Maine quarry enjoys a second act, thanks to one determined gardener.

Breaking All the Rules

Portland designer Angela Adams has hit the big time by following her own eccentric muse.

For one Georgetown couple, the best way to preserve their seaside dream home was in pieces.

Three outdated buildings have found new lives at the hands of some ingenious Maine renovators.

Famed for its beach, this picturesque piece of the Maine coast is awash with controversy.

Two Maines in Winter Up in the County, three feet of snow is just another flurry. The forecast here on the coast a few weeks ago called for two to three inches of snow overnight capped with a chance of rain. Observers could be excused for wondering if someone had just announced the apocalypse. The school

Should Mainers worry that the state is becoming a dumping ground for out-of-state waste?

Best Photography For this Down East subscriber who lives out of state and generally has to picture Maine’s photogenic landscape through his own mental snapshots, your January “Best Maine Photography” issue reminded me what my eyes have been missing since leaving Maine some fourteen years ago. I am a

It?s not too early to begin planning your child?s summer in Maine.

The latest whodunit from an Eastport author combines home repair and a coven of witches.

The mad geniuses behind Caf? Miranda and Borealis Breads team up to make pies.

My father was not only unafraid of old homes, he embraced them.

Ten years ago, Michael Quigg gambled that Mainers would embrace BBQ. He was right.

A flower show and a film festival foretell the return of spring to Maine.

Mining put the North Woods town of Monson on the map – in more ways than one.