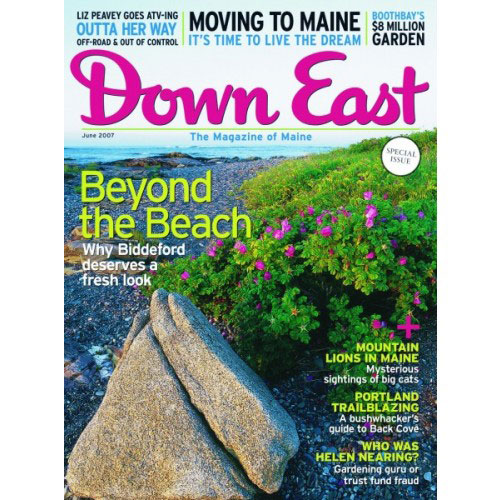 This month, the largest botanical garden in New England blossoms at last on the Boothbay shore.

An ATVirgin hops aboard the most controversial vehicle in Maine.

Off the Deep End

What if you drained the Gulf of Maine? This computer image, created for the Gulf of Maine Council on the Marine Environment, reveals the intriguing underwater features in one of the richest marine ecosystems in the world.

Belfast’s Dennis Pinette has won acclaim by painting the industrial and elemental landscapes of Maine.

Travel with Tom Jewell through the green heart of Maine’s largest city.

This diminutive outpost doesn’t seem quite sturdy enough to stop rampaging French and Indians, does it? Luckily, this blockhouse was only one small part of a much larger fort, which was built in 1754 to protect the locals from just such an attack. The structure was sufficiently stout to survive for centuries

Keel Kemper has driven a hundred miles out of his way to study tracks that the finder swore were left by a mountain lion. “Coyote,” recalls the veteran wildlife biologist with the Maine Department of Inland Fisheries and Wildlife. He has called in the state crime lab to inspect pictures that the photographer

Katahdin Trail Tips Thank you for the aerial centerfold of Mount Katahdin in your April issue. What a magnificent mountain worthy of the deepest awe and respect. On my first trip in 1996 the park ranger advised me to stick to the path and its blue blazes, adding that people who stray from it might get

Events ART cross training You wouldn’t expect an accountant to be a really great health-care provider, or your mechanic to build you a new deck. But an architect who designs cool, modern furniture — it seems a pretty plausible exercise. See the results at Getting Personal: Maine Architects Design

Pouring Money on the Water

Editorial opinions from across the state

Dining A Grand Experiment Chef Sean Doherty brings a sense of adventure to Apollo’s Bistro in Waterville. Twelve years ago, when I first moved to Maine to take a job at Colby College, I received many helpful handouts, including a sheet of paper from my new employer listing Waterville-area restaurants.

Strike Up the Band

I’m tempted to say Monday nights hark back to a simpler time, but that would be wrong.

No one wanted to miss this steamship’s arrival nearly a century ago.