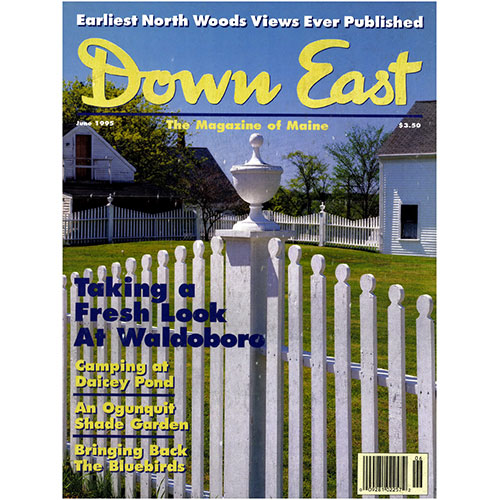 Winds of change have blown ever so softly through this Medomak River town over the last fifty years, but more than a few residents will tell you that suits them just fine. By Jeff Clark.

For Gabe and Marcia Williamson, an idyllic basin beneath Mount Katahdin in remote Baxter State Park is more than a vacation destination — it’s home. By Andrew Vietze.

Six months after Pearl Harbor, the canny auto magnate hatched an ingenious scheme to keep an army  of Mount Desert Islanders employed during the war. By Letitia Baldwin.

An Oriental Oasis in Ogunquit

In the midst of a busy resort town, Louesa Gillespie’s shade garden is  filled with magnificent plants and intriguing paradoxes. By Jane Lamb.

So you think you know Maine. Here’s an island that only comes to life in summer. Been there?

Winning Back the Bluebirds

Thanks to a network of dedicated volunteers, these perky little bug-eaters are returning to barnyards and backyards across the state. By Paul Karr.

Virtually all the art produced on Monhegan Island over the last century is colored by the bold Atlantic, as a major new show and large new book amply demonstrate.

It was a memorable day in 1938 when Pilot beat out Blueberry Joe. By Ellen MacDonald Ward.

Since I write ravel essays for a living, I must travel a great deal, and I’ve found the  world of  travel to be the fountainhead of some of the most highly creative and sublime nonsense that can be found outside an opium parlor. By Caskie Stinnett.

The Talk of Bolsters Mills