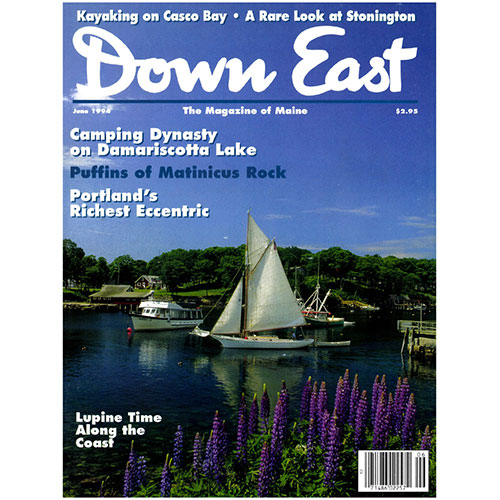 Improving on a Good Idea

Dick Kennedy and his family have turned Camp Kieve, an old-guard summer camp of the finest kind, into a model year-round learning center. By Jeff Clark.

Newly discovered photographs show Stonington at the peak of its prosperity — when granite was king and the burgeoning town attracted a doctor of singular ambition. By Davis Thomas.

Researchers are watching a fascinating  little woodland denizen to gauge the health of the North Woods. By Sarah Scott.

For Tom Bergh, guiding kayakers among the storied Calendar Islands is more rewarding than lawyering ever was. By Hannah Holmes.

Wayne and Loraine Hamilton have built up a ship chandlery in Searsport that is as popular with local fishermen as  it is with visiting yachtsmen. By James P. Brown.

Sue Schubel spends her summers making sure puffins have a nest to call home. By Pete Salmansohn.

At the turn of the century, Eastport had a holiday all its own. By Ellen MacDonald Ward.

Room  With a  View

It is perhaps foolish of me to try to write about Margaret since the strength of our relationship was a sort of secret bond, a knowledge that we shared certain things — some  trivial and some very important — and that was the way it was and that was the way it was supposed to be. The thing that cheers me — if anything does at this mean time in my  life – is that Margaret had no leftover life to handle without me. By Caskie Stinnett.

The Talk of Washington, D.C.

Kicking Off the Season