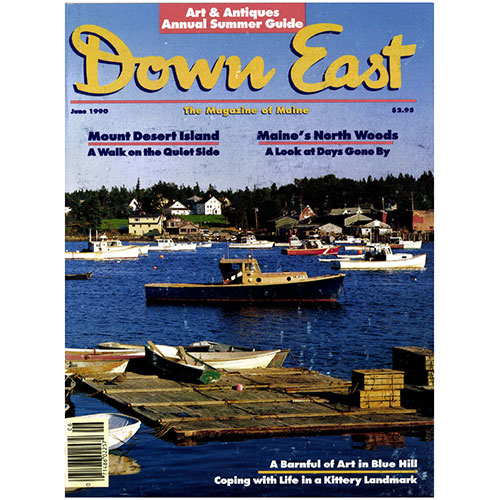 Living in a Landmark

Kittery’s Lady Pepperrell House has all the comforts of home — and sixteen pages of deed restrictions. By Ellen MacDonald Ward.

Call of the Wild

At Haynes Garage on Mount Desert Island, vintage cars are the guests of honor. By Nan Lincoln.

A Kennebunkport sea captain’s extraordinary collection of Oriental treasures is the centerpiece of the Brick Store Museum’s fiftieth-anniversary season.

A Splash of Color

More than a century later, theories of robbery, embezzlement, even suicide still surround the strange death of a Dexter bank treasurer. By Michael D. Burke.

Our greatest authority on all things Maine debunks a few myths about Colonial history, including the one about how the Pilgrims learned to plant com. By John Gould.

One summer’s rental proves the axiom: Rent in haste, repent at leisure. By Christopher Corbett.

At Burt’s Bees in Parkman, it is beeswax, not honey, that greases the path to success.

A fourteen-page report on the  lively Maine art and antiques scene, June through September.

Dogs are smarter than most people think, and the fact that they have gotten where they are pretty much bears this out. Horses sleep in stables, pigs inhabit pens, chickens roost in henhouses, and Margaret sleeps at the foot of my bed, often with an afghan thrown over her. By Caskie Stinnett.

The Potato Baron by John Thorndike

The Lady Driver in Presque Isle

Cover: Bass Harbor, on the quiet side of Mount Desert Island. Photograph by Jack Ledbetter.