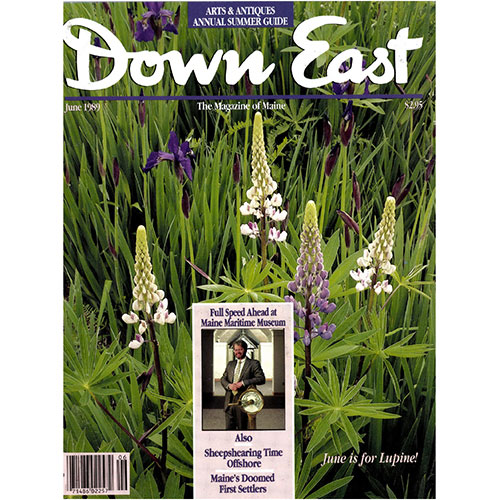 Vim and vigor — and a new building — set a solid new course for Bath’s Maine Maritime Museum. By Jeff Clark.

Every June for the last forty-five years Jenny Cirone has supervised the shearing of her ewes on an island pasture in the Gulf of Maine. By Philmore B.Wass.

In June of 1604, with Sieur de Monts and 125 colonists, the great French explorer founded the first European settlement in New England on an island in the Saint Croix River. By Donald R. Canton.

As a hobo during the Great Depression, Irving Stevens saw the worst but came out whistling. By Ernie Freeberg.

Method in Her Madness

Marjorie Moore admits her work is “weird” and “nutty” but critics call her one of Maine’s most important artists. By Beth Crichlow.

Every June a tidal wave of purple sweeps across Maine. Color photographs by Joe Devenney.

The Year the Russians Came to Town

Southwest Harbor had never seen anything like it: a mystery ship, 600 mysterious passengers — all male — and they stayed all summer. By D.S. MacDonald.

A Life in Balance

Antiques, furniture manufacture, and theology — they’re all components of the good life at Rob Stuart’s eighteenth-century farmhouse in Limington. By Wayne Curtis.

To Dwell in Unity

Pictures by an amateur photographer portray a close-knit life in a rural Maine town when the century was young. By Elizabeth M. Houdlette.

Making It in Maine

A 19-page report on the lively Maine art and antiques scene, June through September.

There is a lot of talk about cleaning up Maine’s seacoast but everybody seems to be biding their time until they are forced to  do something and the force hasn’t yet appeared on the scene. By Caskie Stinnett.

The Talk of Ellsworth

Top of the Month

George Magoon and the Down East Game War