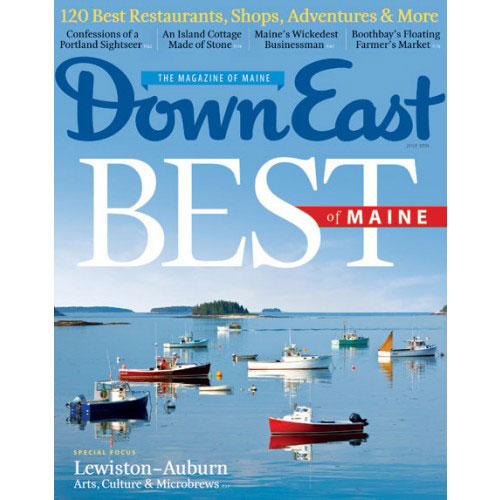 Once again this year, we let our loyal readers weigh in on the subject of the best of Maine. The editors won’t claim to agree with all your choices, but Maine is an independent-minded state, so we fully appreciate them and are pleased to see that we pretty much all agree on one thing: our shared affection for all things Maine.

The revitalization of the Bates Mill is on track to redefine downtown Lewiston.

One small boat brings the bounty of summer to Maine’s island inhabitants.

Here’s to You, Lewiston

After less than six months in business, the youthful founder of Baxter Brewing is already expanding to meet the demand for his canned suds.

The story of Edgecomb Potters is one of artistic and business success. Most of all, though, it is a love story.

Where To Catch A Concert, Learn To Build A House, Impress Your Guests, Take An Island Hike.

Here’s a sampling of the plethora of restaurants that populate the approximately 2.5-mile peninsula portion of this major artery.

A rustic cottage on a tiny midcoast island proves that when it comes to summer fun, size truly doesn’t matter.

How Lewiston-Auburn quietly became one of Maine’s cultural capitals.

Portlander Elizabeth Peavey decides it’s high time to “visit” her own city as a sightseer.

Lewiston-Auburn has managed to retrofit many of its most historic structures into buildings that manage to fit their modern uses while retaining their historic charm. Here are some of the more noteworthy buildings to keep an eye out for in L-A.

How does Jack DeCoster keep getting away with it?

For my birthday a few months ago, my wife bought me an iPhone. Like more than a few Mainers I had been slow to embrace the idea of the cellular telephone, not out of any Luddite impulses, but for the simple reason that the coverage in so much of our big state was so abysmal. I had tried making do with a cheap, pre-paid phone I kept for roadside emergencies, but it had all been for naught.

While nothing beats homemade blueberry pies and muffins, we don’t always have the time to make them from scratch. For those in need of a quick, easy bite of Maine, consider trying the new wild Maine blueberry turnovers from the folks atRobinhood Free Meetinghouse/Gagne Foods (25 Wing Farm Parkway, Bath, 207-386-5071. www.gagnefoods.com). Makers of the famed seventy-two-layer cream cheese biscuits (still as flavorful as ever), the company has expanded its frozen offerings in recent years.

Time off in 1914 meant cool dips and boat rides in the Saco River.

Can you identify the town that boasts fun sculptures and powerful falls?

A comprehensive history of the Portland suburb is a valuable addition to Maine’s historical library.

Read what our readers have to say about Maine.

We all need a place where there is nothing to do.