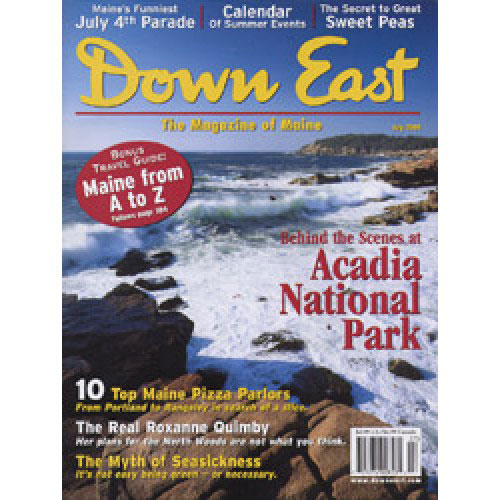 Fishermen have long blamed the common shag for woes of all sorts, but now they want permission to shoot it. Ken Textor looks at the brewing controversy.

The Little Town That Loves a Parade

Nothing about picturesque Round Pond suggests that it might be home to the most outrageous Fourth of July celebration in Maine, as ardent flag-waver Elizabeth Peavey found out.

The colors that distinguish the pottery of Cathy Hammond were inspired, she says, by the natural world she?s observed in Maine.

A Surry woman and her family are working overtime to meet the burgeoning demand for these old-fashioned flowers.

Letters to The Editor

East Machias Legacy I read with great interest your April article about East Machias, as I was born there and spent twelve years living there when my father was a teacher, coach, and principal at Washington Academy. Your article mentions in passing that “the region was once an important shipbuilding

I’m told that my colleagues are going to give me a party to mark my retirement from more than thirty years at Down East. I only wish it were possible to invite all quarter-million of you who read this magazine each month, as I think together we would have one of the liveliest parties in the history of

Behind the Scenes at Acadia

Most of the visitors who pour into Maine?s only national park each summer have no idea that the pristine ?natural? splendor is kept up by a veritable army of workers.

Although he?s renowned for his work in Manhattan, his iconic paintings of summer up here showcase this artist?s genius.

Studies in Black and White

Between the villages of Rockport and Camden lies a remarkable farmstead that has been charming photographers for decades.

Sometimes nothing else will do. Here are ten places guaranteed to satisfy your craving.

Homespun cosmetics tycoon Roxanne Quimby may become Maine?s greatest benefactor since Percival Baxter ? despite threats and ugliness that have forced her to move out of state.

Calming The Motion Of The Ocean

Is your fear of seasickness keeping you from setting sail this summer? Our own Joshua F. Moore ? a schooner captain himself ? explains how easy it is to beat this maritime malady.

Across the state, Mainers are panicked over the possible spread of addiction treatment clinics.

A new book about the infamous church poisonings bungles the story.

Maine from A to Z

An Insider’s Guide to Summer in the Pine Tree State

The state employees? union just received a $700,000 annual windfall from the governor.

Here?s a bargain for families vacationing in or anywhere near Wells.

At Sea in South Freeport

I might have been homeless in Casco Bay, but I wasn?t friendless.

A neighborhood restaurant on Munjoy Hill might be the city?s most buzzed-about.

Catch of the Day

Walter Tolman knows how to draw a crowd. From the group of onlookers, at left, who have gathered on the docks of the Lane-Libby Fisheries Company in Carvers Harbor to the piles of cod, hake, and pollock that cover his decks, the arrival of Captain Tolman, standing at lower right on the foredeck of his