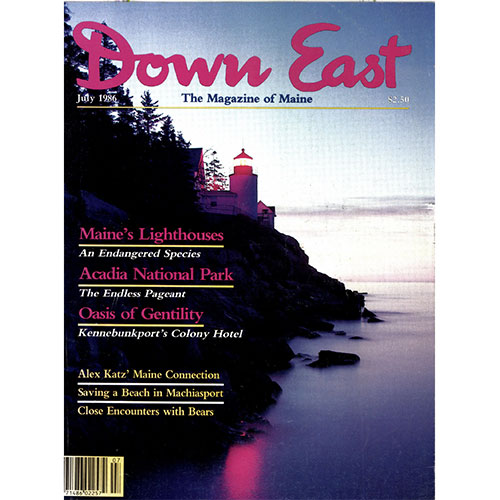 Automation and nature are exacting their toll, but community action and innovative new roles offer rays of hope for these cherished maritime relics. By Jeff Clark.

Close Encounters of an Ursine Kind

Face-to-face confrontations between bears and campers are on the rise in Baxter State Park. By Wayne E. Reilly.

How Marion Davis, a schoolteacher from away, saved a pristine beach for Machiasport. By Cynthia Bourgeault.

Basking amid international acclaim, one of America’s leading painters is back home in Maine for the summer. By Tony Glavin.

Bernard McLaughlin, of South Paris, has fashioned a career out of making his shady backyard blossom. By Jane Lamb.

Color photographs by Alan Nyiri capture the many moods and faces of this special island park.

An Oasis of Gentility

Enigma of the Sparkling Seas

Why does sea water glow at night? Sea walnuts, small crustaceans, and dinoflagellates, that’s why. By Susan Peterson.

A moist chill pervaded the house, and I made a fire in the fireplace which sent a rosy glow dancing about the living room and chased the shadows from the corners. By Caskie Stinnett.

Thirteen Years of the Blues

Dud Spuds and a River Reborn