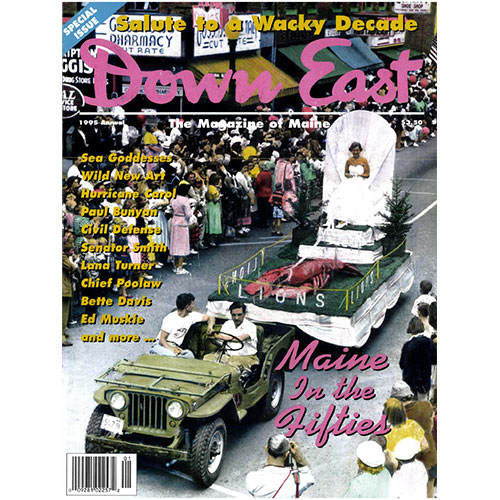 Maine in the Fifties

The fifties were the decade that changed Maine forever. Not only did hidebound traditions begin to crumble, but the way Mainers were perceived by the rest of the country also began to change. In the pages of this special Annual issue, we take a look  at just what happened.

Can you can recognize your own hometown from these vintage fifties views of Maine?

Loring Air Force Base, the Bluenose ferry, Paul Bunyan — just three of the proud new arrivals in the fabulous fifties.

Maine didn’t rush to modemize with quite the same fervor as the rest of the booming nation, Caskie Stinnett discovered when he frst started traveling to the coast.

A Singular Act of Courage

In 1950 Margaret Chase Smith stunned the nation when she stood up to denounce the monstrous Joseph McCarthy on the floor of the Senate. But no one in Skowhegan was surprised. By Sarah Goodyear.

From Pat Nixon and Chuck Berry to Bette Davis and President Eisenhower, an amazing array of famous figures visited Vacationland during the decade.

The artists who found their way to Maine in the fifties were a new breed — and as motley a collection of talents as the state had ever seen. By Carl Little.

Even the lanky young candidate’s closest advisors didn’t expect him to upset 100 years of Down East voting tradition. By Jeff Clark.

Faces of the Fifties

The photographs of James  A. Moore, of Glen Cove, captured the faces and foibles of the times.

Nineteen fifty-four was a pivotal year in the  life of Camden village, maybe more so than in any other community in Maine. By James P. Brown.

Signs of the Times

Log drives and nuclear submarines were among the everyday crazy combinations that Mainers ran into in the fifties.

The American people,  it seems to me, are steadfastly inconsistent about what they like and don’t like, but one of the endearing qualities of Mainers is that here feelings run surprisingly deep and once Mainers develop a fondness for something it is not displaced easily. By Caskie Stinnett.

Voices from the Fifties