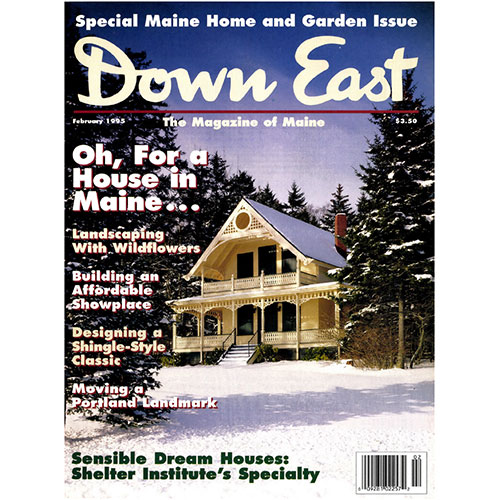 How to Build a Dream House

Pat and Patsy Hennin, of the Shelter Institute in Bath, preach common sense and the pursuit of happiness right along with lessons in plumbing and wiring. By Jeff Clark.

When the right architect meets the right client and they have the right location and the right idea, wonderful things can happen. By Ellen MacDonnld Ward.

Mary Ingalls sells antiques by the yard in her Old Port shop. By Sarah Goodyear.

By hauling an unusual old landmark out of a neighborhood scheduled to be leveled, Greater Portland Landmarks created a monument to its own determination. By Ellen MacDonald Ward.

Affordable housing doesn’t have to be flimsy or drab, according to a pair of Portland businesswomen. Photographs by Brian Vanden Brink.

Sue and Bucky Owen are the only people on their street who don’t mow their yard — and the result is dazzling. By Jane Lamb.

Taking care of patients at home instead of in hospitals is an old idea that is suddenly catching on across Maine. By Jeff Clark.

Relocating a house in the 1800s called for the help of neighboring farmers and as many hooved helpers as they could muster.

I worry a lot about the state of this nation, and I feel that most sensible people do. Television now manipulates us all, and those who are stuck in traffic have their opinions formed for them by radio talk-show hosts who were formerly disc jockeys of rock music. By Caskie Stinnett.

The  Talk of Ellsworth