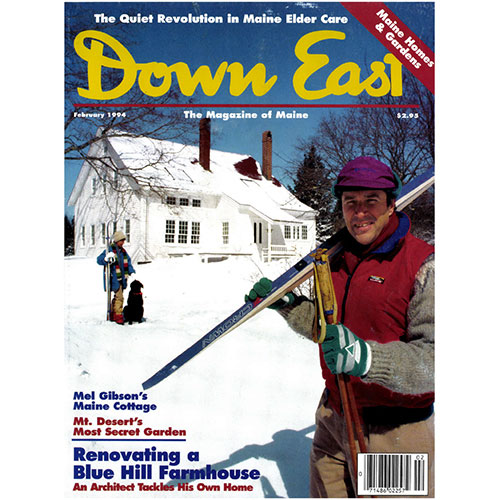 For nearly a century such dashing figures as Captain Kidd and Mel Gibson have propelled the Maine cottage of Frederick Law Olmsted into the national limelight. By Ellen MacDonald Ward.

My Life as a Client

A Blue Hill architect renovating his 200-year-old farmhouse found that, when  it came to the budget, practicing what he preaches was no easy matter. By Robert Knight.

Thuya Garden, on Mount Desert Island, is one of Maine’s loveliest public gardens, but tread lightly if you go. By Jane Lamb.

Jeff Gammelin’s unusual fireplaces are works of art that often look like works of nature. By Sarah Goodyear.

The decision to buy or not to buy has always haunted hopeful homeowners. For a single woman  in 1921, however, the question was even more complex. By Katharine Butler Hathaway.

Settling in on Casco Bay

A commodious  little guesthouse on Long Lake  in Naples draws heavily on the conventions of a typical cabin. By Andrew Vietze.

If you feel inclined to remark on my ability to coast so effortlessly between literature and dogs or literature and orangutans, remember that it requires more courage to defend two fronts than is required of more timid writers who are exposed on a single  flank. By Caskie Stinnett.

The Talk of  Bar Harbor

It Is Not Now: Tales of Maine by John Gould

Cover: Robert Knight, his wife, Lucia, and their dog, Pearl, enjoy themselves in the snow outside their totally renovated Blue Hill home. Photograph by Brian Vanden Brink.