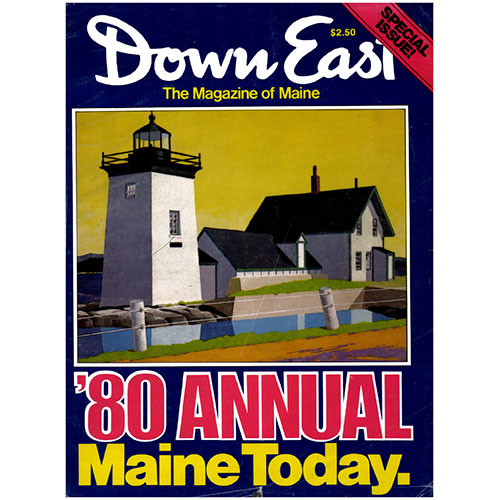 The Pine Tree State once stood number one in the nation as a vacation destination. Although changing travel habits and the westward shift of population have cost the state its top ranking, Maine still plays host to millions of visitors, who pump more than a billion dollars each year into the economy. After the forest products industry, the tourist business is one of the state’s biggest money earners and a source of employment — both seasonal and year-round — for many thousands of Mainers. The implications of the energy crisis, however, are forcing a reassessment of Maine’s tourist economy in the 1980s. Seventeen pages of photographs and text explore the past, present, and future of Maine tourism. By John Lovell and Tom Davis.

Few places on earth can boast the variety of natural beauty that lies within the borders of the Pine Tree State. From surf-battered headlands, to dense forests, to sculpted mountain peaks and inland lakes, Maine scenery embodies a breadth of grandeur that has inspired visitors for generations. Eight pages of color photographs.

Year after year, the Maine voter has come down hard on the side of environmental preservation. In recognition of the state’s enlightened and dedicated citizenry, Down East Magazine presents its 1980 Environmental Award to the Maine Voter.

Hurrah for the Maine Voter

Invited to rescind the returnable bottle law by out-of-state interests, the Maine voter said ‘No thank you,’ by a six-to-one margin. An evaluation of the increasingly independent and conservation minded voters of the State of Maine. By Clark T. Irwin, Jr.

A resource-by-resource view of victories and defeats on the environmental front during the year just past, coupled with a glance to the future. By Robert Deis.

A renewed spirit of vigor and civic pride is everywhere evident in this historic Kennebec shipbuilding port. Sparked by a coalition of longtime residents and new arrivals, and fueled by the economic contributions of a burgeoning number of small businesses, Bath has been busily revitalizing its economic and cultural life. A sixteen-page profile of one of Maine’s most beautiful, historic, and lively cities. By Gloria Hutchinson.

In the last decade, many of Maine’s major museums have been infused with new energy and professionalism, a development indicative of the state’s continuing cultural boom. In photographs and text, a look at the flourishing Maine museum scene. By Michael T. Kinnicutt.

Portland’s Waynflete School has capitalized on its small size to become one of the state’s most innovative centers of education. By Tucker Mann.

Maine teems with small entrepreneurs and artisans. From soap to ships and knives to notepaper, seven men and women who are “making it” in the Pine Tree State.

What’s ahead for Maine business in 1980? Frederick H. Greene, Jr., director of the New Enterprise Institute, tells why the state’s economic future depends on the growth and encouragement of small business.

The Year That Was

A newsy, anecdotal review of 1979, touching on important events of the past year — from an unabashedly Down East point of view. By Winthrop C. Libby.

Lobsters by the Half Ton