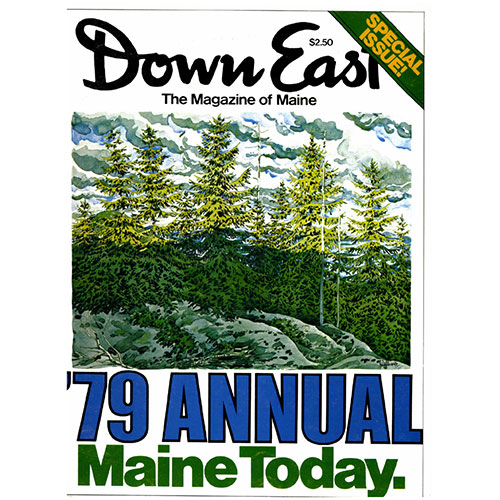 From the earliest days of European settlement, the Maine forest has been the principal means of livelihood for Maine people. Today, the forest-products industry, led by paper making, accounts for $1.5 billion annually and provides jobs for 43,000 Mainers. Maine leads the nation in paper-making capacity, and wood, after 3.5 centuries, is still king in the Pine Tree State. By Davis Thomas.

Rebirth of a City

Ten years of hard work and the expenditure of many millions of dollars have brought about a civic renaissance in downtown Portland. An in-depth profile of Maine’s largest city today highlights the people and institutions behind the astonishing revitalization of what had become a decaying urban center. By John Lovell.

Winner of Down East Magazine’s Environmental Award for 1979 is Charles Bradford of Manchester, for forty years a leader in the conservation and restoration of Maine’s matchless environmental heritage. By Gloria Hutchinson.

A resource-by-resource review of victories and defeats on Maine’s environmental front in the year just past. By Robert Deis.

Enrollments at the state’s private academies are soaring as parents seek a return to basics. Hebron Academy, 175 years old this spring, exemplifies this new trend. By Wayne Reilly.

Photographic essay. Sixteen pages of color photographs portray the Pine Tree State in all seasons and varied moods, from the southern coast to the Great North Woods.

Is the native Down-easter becoming a truly endangered species? A semiserious assessment by Norwood P. Beveridge.

The State of the Arts

Time was, when culture in Maine came to an abrupt halt at summer’s end. No longer! Sparked by the Maine State Commission on the Arts and Humanities, the arts are alive and well in the State of Maine — all year round. By David E. Wellington.

For more than a century, the state has been a magnet for outstanding artists, a tradition that continues today. In pictures and text, a look at a cross section of contemporary Maine painters.

The Year That Was

Foreign cuisine comes to Maine. A survey of the new “ethnic” restaurants. By Mimi E.B. Steadman.