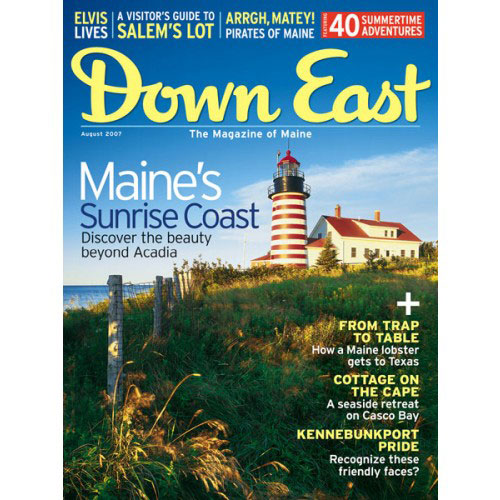 You won’t want to miss the display of floating horsepower in Portland Harbor this month.

A Day at the Races

Harness racing isn’t just a way to gamble in Maine. It’s also a way of life.

The King is Dead. Long Live the King!

Thirty years ago this month Elvis Presley died just hours before he was to fly to Portland for two sold-out shows. For his Maine fans it was a crushing blow. Three decades later, Maine’s True Fans for Elvis still have their tickets for those shows and are

At the Edge of America

Homarus Odyssey: From Trap to Table

How Maine lobster gets there from here.

Way Off The Map

You won’t find this town in any Maine guidebook, but it’s just the sort of place tourists are dying to visit. With apologies to the King of Horror.

Did the great Caribbean pirate Sam Bellamy build a base in Machias, or was it a case of mistaken identity?

You can read the story of a Maine town in the faces of its people.

How well do you know Maine? Take this quiz – excerpted from the new Down East book Guess Where from the Air by Chuck Feil and Murad Sayen – and see.

Cottage On the Cape

A grand summer retreat offers views of not one but three lighthouses.

Little Suburb in the Big Woods

LURC is desperately in need of a new plan.

As a military wife, I have been away from home since I was twenty-four years old. Down East keeps me connected to my roots in Maine and I look forward to every issue. I often recognize the “Where in Maine?” photos and they bring a smile to my face, but today when I opened the June issue I was suddenly

My brother e-mailed me the other day to ask what I thought about L.L. Bean launching its own amusement park in Freeport. At first I assumed he was joking, but, alas, he was serious. The venerable Maine retailer is indeed planning to open a theme park, about a mile from its flagship store, within three

DINING European Flair Ephemere Cafe brings a bit of the continent to Camden. Tucked discreetly halfway down a side street in Camden, Ephemere Cafe has until recently been something of a well-kept secret in the village. But as owners Patrick and Heidi Cazemajou complete their third season, the restaurant

Editorial opinions from across the state

Events MUSIC Sugar & Spice John Hiatt’s got a gruff voice, somewhere between a growl and a rasp. Shawn Colvin’s pipes are clear and unfiltered. Together, they give you goosebumps, especially when they take on creative covers (Colvin does a plaintive version of the Bee Gees’ “Words” on her latest album)

America’s most famous aviator wasn’t afraid to get wet during one of his frequent visits to Maine.