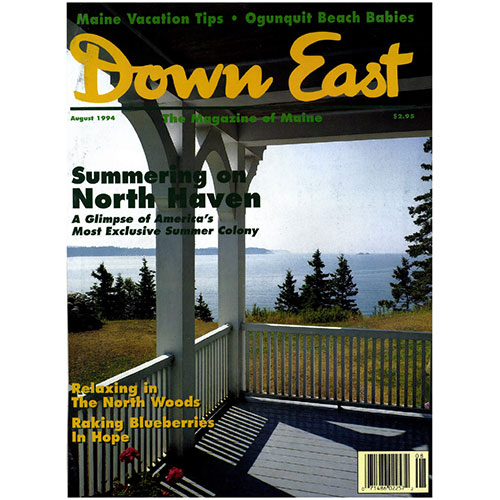 Sailing by the ancient saltwater farms on this Penobscot Bay island, one would have no idea that they are owned by some of the nation’s most prominent families. Only the views might tip you off. By Ellen MacDonald Ward.

Staying at  Tim Pond Wilderness Camps is like going to a family reunion in the woods — maybe better. By Sarah Goodyear.

At Kennebunkport’s Seashore Trolley Museum, refugees of the computer age are discovering the irresistible charms of the unabashedly low-tech streetcar. By Jeff Clark.

In the Heart of Rachel Carson Country

Amid a former nature sanctuary at the tip of Southport Island, Peter and Heidi Larsen have refurbished a landmark inn. By James P. Brown.

The man who invented the most famous pastry in Machias has finally retired, but his pie goes on.

Two Geniuses and a Paintbrush

No one knows how to enjoy sand, sea, and sun quite the way little kids do. Photographs by Tonee Harbert.

Turning an empty intown yard into a sanctuary  of serenity calls for imagination, know-how, and powerful inspiration. By Jane Lamb.

The way we earned spending money back in the fifties was almost larcenous. A reminiscence by Deborah Dalfonso.

Taking the waters at Poland Spring was a perfectly elegant way to restore one’s health. By Ellen MacDonald Ward.

Politics is too crowded and hemmed in these days to make much sense and it’s easy to lose sight of what should lie at the end of the road — good government. By Caskie Stinnett.

The  Talk of Swan’s Island

The Enchanted by Elizabeth Coatsworth