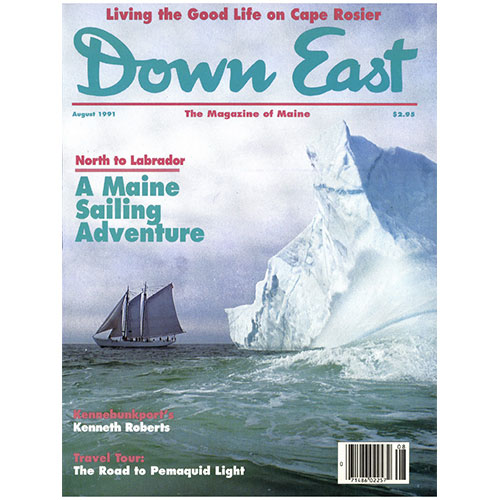 Kennebunkport’s best-selling novelist Kenneth Roberts was a card-carrying curmudgeon — and proud of it. By Jack Bales.

On a farmstead once owned by Scott and Helen Nearing, an energetic couple pursues their own vision of a sane and simple life. Photographs by Lynn Karlin.

Bar Harbor residents still alk about the moming  in 1914 when the town awoke to find a treasure-laden German luxury liner anchored just offshore. By Nan Lincoln.

A farewell to Thursday-night softball on Kezar Lake: The spirit was willing but the flesh grounded out. By David E. Morine.

Dog Days in the Rangeleys

Celebrated for his zany portraits of his dogs, photographer William Wegman summers with his models in a rustic lakeside cottage. By Beth Crichlow.

One of Maine’s grandest summer hotels, the Black Point Inn adheres to the standards — and comforts — of an earlier day. By Deborah Dalfonso.

The Road to Pemaquid Light

A visit to the famous lighthouse can be one of the most rewarding excursions in Maine. Best advice: take it slow. By Michael Uhl.

I can’t say I’ve never seen a moose I didn’t like because I haven’t seen enough to make a sensible judgment. By Caskie Stinnett.

Cover: Riding the seas in a small inflatable boat, photographer Tom Stewart captured this once-in-a-lifetime portrait of the restored Arctic schooner Bowdoin emerging  from behind a monumental iceberg off the coast of Labrador last summer while the vessel was on a Maine Maritime Academy expedition.