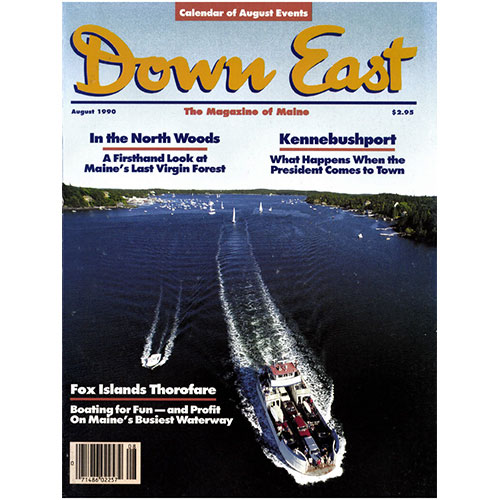 Twilight of the Wilderness

Maine’s northem wildemess is under siege by loggers and real estate developers, and a few public-spirited landowners and conservation groups are moving to protect what they can. A report from the endangered North Woods. By Davis Thomas.

Joe Sewall carries on a family tradition in preserving a magnificent splinter of Maine’s forest heritage. By John N. Cole.

Summering with the Peabodys

How to make an acceptable cream sauce was only one of the things a Bangor college student learned at her summer job in Northeast Harbor. By Deborah Dalfonso.

Carving out a Garden

For nearly four centuries the deepwater passage between North Haven and Vinalhaven islands has been the most colorful maritime highway along the coast. By EllenMac Donald Ward. Photographs by Benjamin Magro.

The Mistress of ABCDef

A fixture in Camden for nearly a quarter century, Lillian Berliawsky runs one of New England’s most beguiling bookstores. By Wayne Curtis.

On August 6, 1899, when hundreds gathered at Mount Desert Ferry to commemorate victory in the Spanish-American War, triumph turned to tragedy in an instant of splintering timbers, panic, and icy waters. By Nan Lincoln.

He Covers the Waterfront

Difficult isn’t really the right word to use in discussing the relationship between a man and his dog because the dog can’t speak for itself and we end up with only one side of the debate. By Caskie Stinnett.

The Talk of Eastport

Selections and Transformations: The Art of John Marin