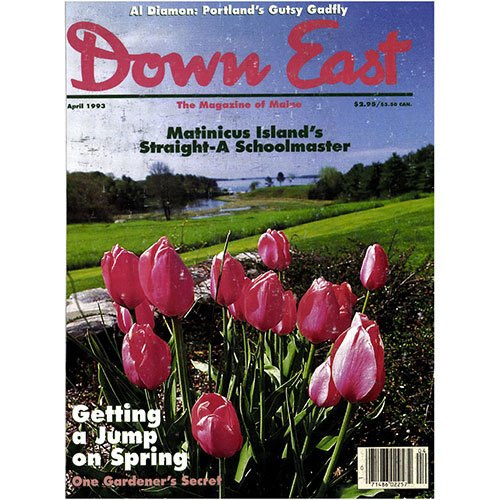 In five years of unorthodox teaching on Matinicus Island, Tom McKibben has earned a name for himself as “dean” of Maine’s offshore one-room schoolteachers. By Cynthia Bourgeault.

Godfather of the Maine Istands

Philanthropist, outdoorsman, conservationist, Thomas D. Cabot is winner of the 1993 Down East Environmental Award for his efforts in protecting the Maine coast for posterity.

One mid-coast gardener gets a jump on the season with a carefully calculated succession of tulips and daffodils. By Jane Lamb.

Diamon in the Rough

Portland columnist and talk-show host Al Diamon has spent the last twenty years honing his ability to shoot from the lip. By Wayne Curtis.

Maine’s most irrepressible painter of the 1930s created a robust ode to the North Woods for the Westbrook Post Office. By Martha Severens.

I  was sharply  criticized by one reader who said she didn’t understand how I could write a piece about rednecks without being aware of the importance of Elvis Presley in the redneck scheme of things. It was as though, she said in an accusation that stung, I had written a history of the United States without mentioning Thomas Jefferson. By Caskie Stinnett.

The Talk of Crotch Island

No Room for Racism

Cover: Tulips herald the arrival of spring on a mid-coast saltwater farm. Photograph by Benjamin Magro.