Long known for its car culture, South Portland is reclaiming neighborhoods where residents prize getting around on foot. 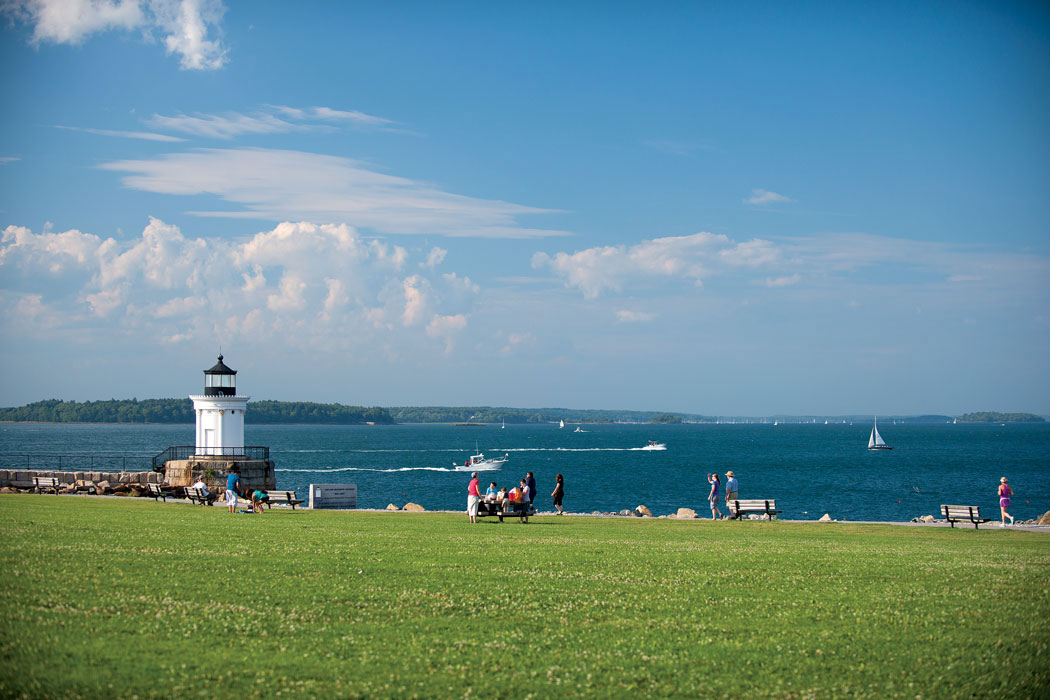 Nearly every day, Jeannie Dunnigan roller-skates down the middle of Ocean Street to Smaha’s Legion Square Market to pick up ingredients for Cia, her bistro and gallery in South Portland’s Knightville neighborhood, just east of (and in the shadow of) the Casco Bay Bridge. In just two years, Cia (pronounced see-ya, the name is an acronym for coffee, ice cream, and art) has become a favorite gathering place, and Dunnigan has become something of a local celebrity, thanks to her unusual mode of transportation and her knack for organizing street festivals, art exhibits, and fashion shows.

Jeannie and her husband, Bill, moved to South Portland from Salisbury, Massachusetts, a few years ago so Bill could be closer to his office in Scarborough. Bill had happened upon Knightville while jogging, and even though the sidewalks and street were under heavy reconstruction at the time, he saw through the dust to the neighborhood’s potential. The Dunnigans bought a condo and, in the same building, the retail space that now houses Cia. “I just felt this place needed me and I needed it,” Jeannie says.

[infobox maintitle=”Mall? What Mall?” subtitle=”South Portland has long played second fiddle to Portland, but it’s coming into its own as newcomers bring enthusiasm — and investment — to its waterfront neighborhoods.” bg=”black” color=”white” opacity=”off” space=”60″ link=”no link”]

Cia’s success has had a ripple effect. “I piggyback off of Jeannie,” says Alaina Marie Harris, who makes and markets distinctive bait bag–inspired wallets and clutches in her eponymous shop across the street. “We get amazing foot traffic.” Her bags are so popular — they are carried by J.Crew, and they were a 2014 Martha Stewart American Made finalist — that she is now looking for a larger space. “I definitely want to stay here in South Portland,” says Harris. “If I went across the bridge to Portland, I’d get lost. I want Knightville to be like a little Old Port, and I think it has that potential.”

Such is the sweet irony of South Portland: Maine’s first city of car culture (this is the home of the Maine Mall, after all) is becoming known as a place of vibrant, walkable neighborhoods. The creative economy that enlivened the city of Portland has found its way across the Fore River, bringing new people, new restaurants, and new shops to neighborhoods from Knightville and Ferry Village to Willard Square and Meetinghouse Hill. South Portland, some residents even joke, is playing Brooklyn to Portland’s Manhattan.

[dropcap letter=”I”]n 1997, the Casco Bay Bridge opened and a South Portland neighborhood was born — or, more accurately, reclaimed. For decades, Knightville had been subsumed by traffic flowing to and from the old Million Dollar Bridge linking Portland and South Portland. Forty thousand cars whizzed back and forth on Ocean Street daily, their occupants largely unaware that they were passing through South Portland’s downtown, never mind that people actually lived there. Roller-skating would have been unthinkable. By rerouting all that traffic around the neighborhood, the Casco Bay Bridge transformed Knightville overnight into a calm island, bordered to the south and west by Broadway and the bridge, and to the north and east by Portland Harbor and Mill Cove.

Over the next several years, the groundwork for a new Knightville was laid: residents and business owners worked with city officials and design professionals to create a vision for the neighborhood, the zoning ordinance was rewritten to allow more residential condominiums and offices, and a new streetscape was constructed, with a rotary, streetlights, and wider sidewalks. “For nearly 20 years now, Knightville has been on the cusp of something,” says Bob O’Brien, an insurance agent who worked on the revitalization plan. “In the last year and half, it’s reached the tipping point of cool businesses that are attracting people.”

Stalwart Ocean Street restaurants like Uncle Andy’s, the Snow Squall, and the Bridgeway have been joined by contemporary eateries like Cia, Taco Trio, Verbena, Q St. Diner, and Teriyaki Exchange. You can shop for antiques and ephemera at Heirloom Consignment and G.L. Smith Books & Collectibles [now closed], whimsical paintings of dogs at Mainely Labs Studio, and illuminated conversation pieces at the gloriously cluttered Lamp Repair Shop.

This variety, along with the small-community feel, appealed to artist and therapist Eva Goetz when she downsized from her home in Falmouth two years ago. “South Portland was not on my radar screen, but I feel more attuned to my neighborhood here than in Falmouth,” says Goetz, who enjoys walking her Great Pyrenees Mogi around Knightville and running into friends, neighbors, and even perfect strangers. “There’s greater diversity here. There’s a sense of pride that I was surprised to find.”

While Knightville’s revival has been especially dramatic, other South Portland neighborhoods are undergoing similar transformations. Several new restaurants — OTTO Pizza and Ruby Thai in Ferry Village; David’s 388 Restaurant, Enio’s Eatery, and Elsmere BBQ and Wood Grill, to name a few — have popped up along Cottage Road from Millcreek to Meetinghouse Hill. A few years ago, former Portland mainstay Mad Horse Theatre Company relocated to the waterfront neighborhood of Ferry Village, bringing the number of theaters in South Portland to three (the others are Lyric Music Theater and Portland Players).

“I can spend days without leaving South Portland, without even leaving this neighborhood,” says ceramic artist Abby Huntoon, a Ferry Village resident and co-founder of Sawyer Street Studios. Opened in 1987, the pottery studio operated without attracting much attention for many years, but now it’s seen as a neighborhood fixture and its annual winter holiday sale draws shoppers from all over southern Maine. “There’s a strong sense of community here,” says Huntoon. “People are very protective of it, because we know we have a good thing going.”

There’s a strong sense of community here. People are protective of it, because we know we have a good thing going.

Huntoon is a member of Protect South Portland, the grassroots organization that campaigned to ban tar sands oils from being loaded onto ships at the city’s waterfront. The ban, approved by the city council last July, is another indication of the changes afoot: new blood has brought new attitudes, leading some local wags to nickname Huntoon’s neighborhood “the People’s Republic of Ferry Village.”

“We have a very progressive community,” affirms city manager Jim Gailey, a South Portland native who’s worked for the city since 1986, when he was still a student at South Portland High School. “We’ve always been a strongly Democratic city, but it’s changed as people from other states have come to our community.”

South Portlanders expressed their liberal streak again in November when they voted to legalize marijuana by a margin of 58 to 42 percent. “People in South Portland reached out to us,” says David Boyer, Maine political director of the Marijuana Policy Project, “but the city was on our radar anyway. The vote against tar sands showed citizen initiative and that people were open to new ideas.”

This spring, the tar sands ban cost the city its “business friendly” certification, a state program launched three years ago by Republican Governor Paul LePage, but city officials didn’t seem concerned. “The real facts are on the ground,” City Councilor Claude Morgan told the Portland Press Herald. “We have a tremendous mix of retail and large businesses here and the support is overwhelmingly positive.”

[dropcap letter=”W”]ith revitalization have come development pressures. In 2013, Greater Portland Landmarks, the organization that has led the effort to preserve Portland’s historic architecture for more than 50 years, placed the entire city of South Portland on its Places in Peril list (the previous year, the Maine National Guard Armory, at the foot of the Casco Bay Bridge, made the list). “The city has only three buildings on the National Register of Historic Places, and two are lighthouses,” said GPL director Hilary Bassett at the time. “This is a great opportunity to conduct a survey to see what’s there and what needs to be protected.”

In response, the city has empanelled an Arts & Historic Preservation Committee whose mission is “to figure out how to mitigate change without being onerous about private property and to help create a community that is nurturing and welcoming to the arts,” says committee member Jessica Skwire Routhier, a 12-year resident of the Willard Square neighborhood and a former Portland Museum of Art curator and Saco Museum director.

As South Portland’s prospects improve with the economy, the city is slowly shifting from an economic development to a growth management mode. Knightville, for example, is wrestling with parking issues. Ferry Village is facing pressure on its housing stock as young families and retirees eye the blocks of modest homes once favored by workers at the South Portland Shipyard. “There is demand for places where you can buy a starter home and that no longer exists in Portland,” says Rebeccah Schaffner, president of the Ferry Village Conservation Association and a land-use planner with the Greater Portland Council of Governments. “Ferry Village is the best-kept secret in the Greater Portland area. You can buy more house for less money than anything you could find in Portland.”

[dropcap letter=”T”]he line that snakes down Preble Street at Willard Square on Saturday mornings tends to be full of young couples, strollers, and golden retrievers. There’s a neighborly vibe among the line-standers, and it’s an easy place to make friends (particularly if you can compare strollers). Deep down, however, everyone is tense, wondering if they’ll make it into Scratch Baking Company before their favorite bagel sells out.

Ten years ago, Bob Johnson, Sonja Swanberg, and Allison Reid started Scratch, a bakery and café in an old building at Willard Square that was haunted by what Johnson calls “the ghosts of commerce” — the days when this broad residential intersection hosted a grocery and a drug store, in other words, were long past. Today, what Johnson calls “a community-based business with community-based values” employs 33 people serving a steady stream of customers. “Our core customer is in the neighborhood,” Johnson says. “People walk here every day, sometimes twice a day. It’s like we throw a party every day.”

It is that personal connection — the intimacy of neighborhoods where people get out of their homes and out of their cars and get to know one another — that lies at the heart of the new South Portland.