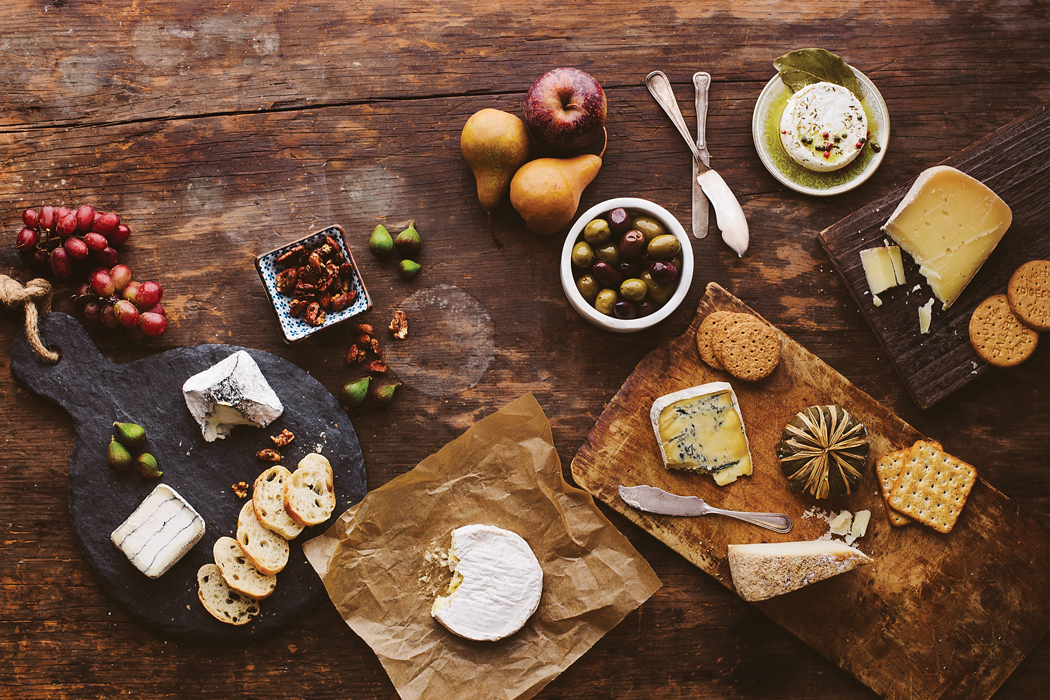 10 Maine Cheeses You Need to Try

The state’s cheesemakers are on a roll.

By Virginia M. Wright
Photographed by Adam DeTour
From our April/May 2017 issue.

The cheese wasn’t cooperating. No matter what Sarah Spring did, it wouldn’t ripen the way she wanted it to. Frustrated, the retired teacher-turned-fromagier turned her back on the small, tall rounds. “Okay,” she muttered, “you do whatever you want.”

When Spring came back to the Spring Day Creamery aging room a few weeks later, she found the rinds had bloomed a mottled white. The interiors were soft, stinky, and delicious. She labeled the rounds faux pas and took them to market, where they sold out. The Brie-like cheese, which she has since named Petit Bonjour, remains one of Spring’s best sellers. “I had no idea it would be so wonderful,” she marvels. “Some of these cheeses act like many of those eighth graders I used to teach.”

Such is the alchemy of artisanal cheesemaking. “Cheeses are alive,” says Spring, who works her magic in a small creamery attached to an 1848 farmhouse in Durham. “It’s a wonderful thing, but it’s like sailing: You have to figure out which way the wind is blowing. You’ve got to work with it, but you also have to have intention and steer things in the right direction.”

That’s a good way to describe what’s happening to cheesemaking in Maine. Ten years ago, just eight licensed cheesemakers worked in the state; today there are 86, a total that puts Maine behind only New York. It’s the way the wind’s blowing: craft cheesemaking is interwoven with the small-farm revival and buoyed by the locavore movement. There’s also been some very intentional steering: The Maine Cheese Guild has worked since 1999 to hone members’ skills and mentor new cheesemakers, most notably by bringing some of the world’s best practitioners to Maine to teach their craft.

“Cheese is so of the place where it’s made. The grass comes from the soil, the cows eat the grass, the grass flavors their milk.”

“Everybody used to think the good cheeses only came from Europe,” says Cathe Morrill, a Guild co-founder and the owner of State of Maine Cheese Company in Rockport. “Now we make incredibly wonderful cheese in Maine and the Northeast, so you don’t have to have it shipped across the pond.”

Guild members describe a collegial community. They help each other troubleshoot various problems — why is my cheese rubbery, corky, curdy? — and they celebrate one another’s wins at regional and national competitions like the annual American Cheese Society awards.

Maine’s cheese production remains small, representing only about a million of the 11.8 billion pounds of cheese produced in the U.S. annually (not surprisingly, Wisconsin, churning out more than 2.5 billion pounds, is first). The guild is now focused on helping cheesemakers boost production and improve branding so Maine’s handmade cheeses have the same cachet as, say, those from Vermont.

Every December, guild members participate in a demonstration of terroir — the unique flavors and aromas imparted to a cheese from the place where it’s produced. They all follow the same recipe and then bring the results to their Christmas party. Without fail, each cheese is distinct in flavor and texture. “It’s our belief that we’re never fully in competition with each other because we can make the same recipe and the cheese will be very different,” says Guild vice president Arlene Brokaw of Imagine Dairy in Warren.

“Cheese is so of the place it’s made,” says Debra Hahn, an artisan cheesemaker in Phippsburg. “The grass comes from the soil, the cows eat the grass, the grass flavors their milk — and all that contributes to the final product. Even the air affects the cheese as it’s aging, especially if you have a cave. I’m on the coast, where the air is very salty.”

That’s precisely what inspires Rachel Bell, whose Tide Mill Creamery in Edmunds is part of a farm that’s been in her family since the 1760s. “It’s thrilling to be part of this full circle, to be connected to these goats who all have a name and a personality and to stroll through the pastures and watch what they’re eating and know that it goes into the milk that becomes the cheese,” she says. “Making cheese is an expression of love — love for an animal and love for a place and its story.”

A three-time American Cheese Society (ACS) Award winner, this fresh, soft chèvre wins over even folks who say they don’t like goat cheese. The fragrant, herbal olive oil softens the tanginess of the bright, lemony cheese.

How to serve: With a fresh, crusty baguette. It’s great tossed with pasta or crumbled on a salad. To sip: Savage Oakes Vineyard’s Barn Red.

Tide Mill is Maine’s largest organic goat dairy and one of only a few in the country. Experimenting with variations on Camembert, Rachel Bell blended her own high-butterfat Nubian goat’s milk with cow’s milk from her cousin’s Tide Mill Organic Farm. This ACS blue-ribbon winner is the happy result.

How to serve: Best at room temperature. Spread it on a baguette or slice it into wedges and serve with fruit.

For 15 years, Sarah Spring lived in France’s Brie region, where it’s routine to serve several cheeses with dinner. “Learning the tastes, it’s like a language,” she says. “La Vie en Rose satisfies that homesick feeling.” Less intense than typical brine-washed cheeses, this raw cow’s milk cheese is a mildly stinky cross between Brie and Muenster. It placed first in the 2012 ACS competition.

Says Heidi: “Sarah nailed it with this one. Semi-hard with a smooth and creamy interior.”

How to serve: Enjoy it with a warm baguette, sourdough bread, or Scandinavian crispbread, which won’t overpower it. To sip: a medium-bodied red wine, such as Cabernet Franc.

Residents of the Welsh town of Caerphilly refer fondly to their hard, cheddar-like cheese as “the crumblies.” “Ours is a bit more creamy because we don’t have the cows that they have,” says Cathe Morrill, who uses Jersey and Guernsey milk. “It’s a most amusing cheese: first, it crumbles, then it melts in your mouth, and you get the tang when you swallow.”

How to serve: This cheese melts beautifully, so use it in fondue and mac and cheese or grate it on top of a baked potato. It’s an everyday cheese, sliced and served with crackers.

Anne Bossi’s goat cheeses are so beautiful, her farmers-market customers photograph them. This bloomy-rind cheese is thinly striped with a gray vegetable ash imported from France. The flavorless ash is more than an aesthetic touch: it reduces acidity and aids in ripening.

Says Ginny: “The earthy, mushroomy rind mellows out the tanginess of this dense and creamy cheese.”

How to serve: Pair it with sweet Honeycrisp apples, fig jam, or a drizzle of balsamic vinegar, or simply smear it on plain crackers. 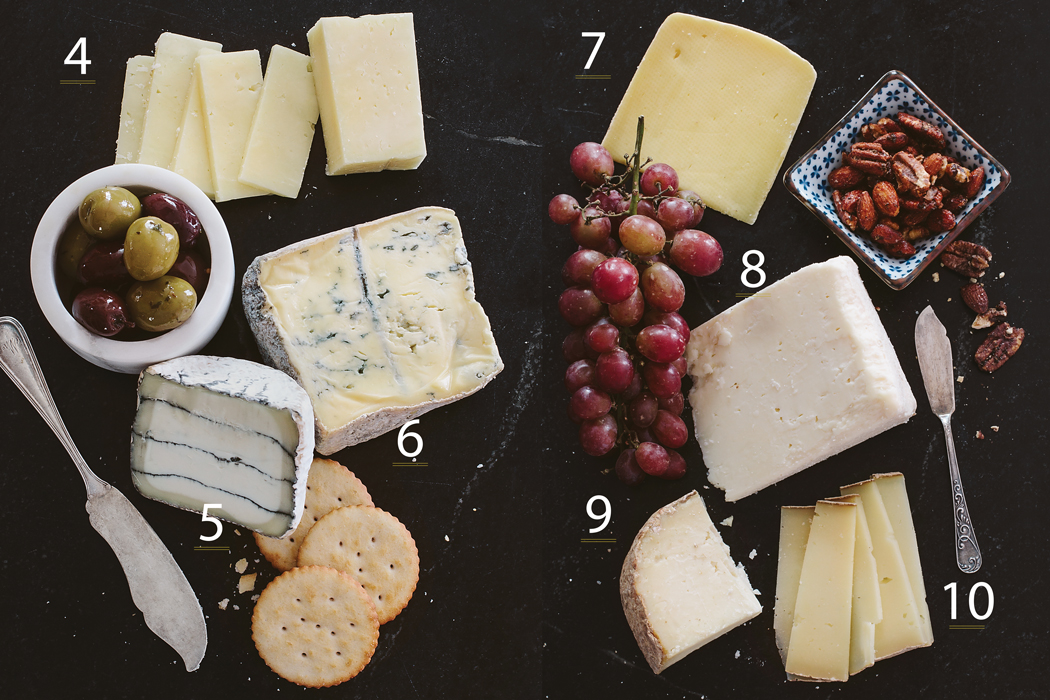 “I have an affinity for bloomy-rind cheese,” says Arlene Brokaw, referring to the white mold that forms on a cheese’s exterior. “It’s the driving force of why I’m a cheesemaker.” Brokaw married Brie and blue to come up with soft, buttery, pungent Hullabaloo.

How to serve: Delicious with candied walnuts.

Another ACS award winner, Tempest is a versatile tomme (tommes are hard, mild wheels made in the French Alps region). “It’s not a complex recipe and not aged super long — three months is about perfect,” says Jessie Dowling, caretaker of some 50 whimsically named goats and sheep. For Tempest, however, she uses organic Jersey cow’s milk from Two Loons Farm in South China.

Says Heidi: “This is a fun, super approachable but really flavorful cheese. Mild without being boring — there are some nice, complex notes. Jessie lets the milk come through and sing.”

How to serve: Sweet apple wedges and preserves go well with this buttery cheese. It makes an awesome grilled cheese sandwich.

Olga is named for the Ukrainian intern who helped Barbara Brooks develop it from recipes for Chaource, a French cow’s milk cheese. Olga uses both cow and goat milks. “We made our first batch in a five-gallon pot in the sink,” Brooks says. It took a few years of tweaking and building up volume before Olga was ready for market.

Says Ginny: “Creamy, slightly crumbly, and milk-white, Olga has the complex flavors you only find with mixed-milk cheeses: peppery, buttery, and a little tangy on the finish.”

How to serve: Yummy with nuts, dates, and dried sausage. Brooks uses it on her to-die-for farm-stand wood-fired pizzas.

Penny Duncan makes Capriano only in the fall, when goats are bred and their milk is rich in fats and proteins ideal for hard cheese. Using a recipe similar to Romano, she makes it in 5–6-pound wheels — about 30 a year. “Once it’s gone, it’s gone,” says Duncan.

How to serve: Nibble with olives, dried sausage, or rosemary crackers. Grate it on linguine with clam sauce or on risotto.

Deb Hahn’s specialty is aged cheeses, so she typically has to wait at least 60 days before sampling the fruits of her labors. Cheddary City of Ships, her take on French Alpine cheeses like Comté, proved worth the wait.

Says Heidi: “One of my favorites, a knock-you-over cheese that appeals to most people. It’s very nutty and flavorful, and as it gets older, it gets more mellow, rich, and buttery.”

How to serve: Delicious with caramelized onions, almonds, fig preserves, and blueberry chutney. To drink, think stouts and porters.

Pat’s Pizza: A Salute to an Old-School Maine Classic