In his new book, Searching for Stars on an Island in Maine, the acclaimed essayist, novelist, and physicist Alan Lightman explores the relationships between science and religion, knowledge and transcendence — all from a quiet, wooded rock in Casco Bay. 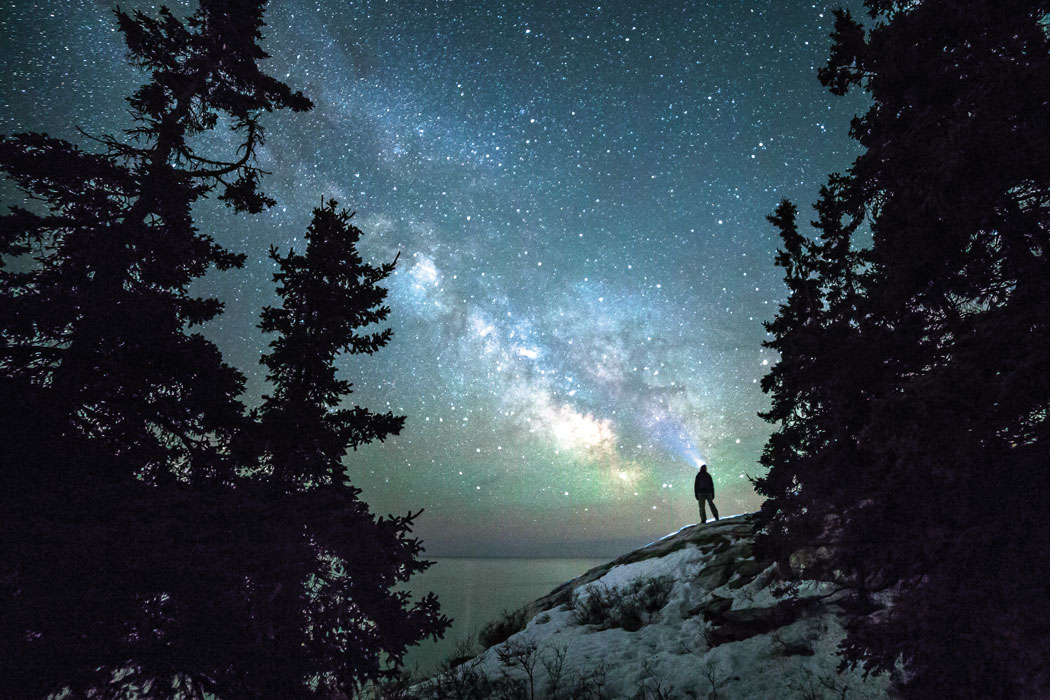 This article appeared in the April 2018 issue of Down East magazine.

For many years, my wife and I have spent our summers on an island in Maine. It’s a small island, only about 30 acres in size, and there are no bridges or ferries connecting it to the mainland.

Consequently, each of the six families who live on the island has their own boat. Some of us were not nautical people at first, but over the years we have all learned by necessity. Most challenging are trips to the island at night, when the landmasses are only dim shapes in the distance and you must rely on compass headings or faint beacons to avoid crashing into rocks or losing your way. Nevertheless, some of us do attempt the crossing at night.

My story concerns a particular summer night, in the wee hours, when I had just rounded the south end of the island and was carefully motoring toward my dock. No one was out on the water but me. It was a moonless night, and quiet. The only sound I could hear was the soft churning of the engine of my boat. Far from the distracting lights of the mainland, the sky vibrated with stars. Taking a chance, I turned off my running lights, and it got even darker. Then I turned off my engine. I lay down in the boat and looked up.

A very dark night sky seen from the ocean is a mystical experience. After a few minutes, my world had dissolved into that star-littered sky. The boat disappeared. My body disappeared. And I found myself falling into infinity. A feeling came over me I’d not experienced before. I felt an overwhelming connection to the stars, as if I were part of them. And the vast expanse of time — extending from the far distant past long before I was born and then into the far distant future long after I will die — seemed compressed to a dot. I felt connected not only to the stars but to all of nature, and to the entire cosmos. I felt a merging with something far larger than myself, a grand and eternal unity, a hint of something absolute. After a time, I sat up and started the engine again. I had no idea how long I’d been lying there looking up.

From Searching for Stars on an Island in Maine (Pantheon)

Dr. Lightman, thanks for taking time to talk about Searching for Stars on an Island in Maine. I’m curious how you came to your island in Casco Bay, which I know you prefer to leave unnamed, for your neighbors’ sakes.

About 30 years ago, when I was in my late 30s, my wife and I went looking for a summer retreat where I could write and she could paint. We heard about this property in Maine through friends of friends. We had not ever considered living on an island, and we knew right off the bat there would be logistical challenges — getting there, fresh water, power — but we decided to take a chance.

I think of the island now as being our spiritual center. The world is moving at much too fast a pace: everybody is plugged in 24/7, everything is rush rush rush. The island in the summer is a place where we can unplug, slow down, listen to ourselves think. It’s a place that’s not commercialized. It hasn’t changed much in the 30 years we’ve been there.

How did this simple island provide the genesis for a rather weighty book?

I’ve always been a fan of Henry David Thoreau’s Walden, which reads as an extended meditation in this beautiful place, and of Annie Dillard’s Pilgrim at Tinker Creek. Those two books are sort of my literary-spiritual background. And ever since taking seasonal residence at the island, I’ve always thought I wanted to write a book about the experience of being there.

I’ve also wanted to write a book about science and religion. My position is that religion and science can coexist, that there are many things we believe on faith that we can’t prove, and that whether or not you believe in a god, there are many beautiful experiences associated with religion — transcendent, spiritual experiences. I thought that one way to talk about the dialog between science and religion in a more expansive manner than in my previous articles was to frame it as an extended meditation, in the way that Thoreau and Dillard did. And, of course, to have a meditation, you need to have a place where you’re meditating.

Do you imagine places like your island are more likely to prompt this kind of reflection than, say, an urban rooftop or a cozy study?

There’s this little town in India where the Buddha gave his first sermon, and you can pluck a random person and put them under the tree where the Buddha spoke and they’ll be totally unaffected by the experience. So it depends a lot on the person. But I do believe there are some places that lend themselves to meditation and reflection. I think it’s possible for a person to be meditative in an urban setting, but I think it’s much harder and the experience is of a lesser quality than being on an island in Maine or a similar place. I think many people are simply inspired by the beauty of the outdoors.

In the book, you seem to do a lot of projecting from your island, envisioning yourself next to Admiral Peary, or scuttling with the ants, or traveling the cosmos. How important is visualization to your work as a writer and a scientist?

I think every writer lives in the world of the imagination. Readers do too. It’s why people read books, to take them out of their current circumstances and into imaginary worlds. It enriches their lives, gives them more experience of the world, gives them more lifetimes. Writers have to imagine to create those larger worlds. Scientists need imagination, especially in the 20th and 21st centuries, because we have gone far beyond what our human senses are capable of perceiving: from very tiny sizes, at the quantum level, to very huge sizes, galaxies and larger; traveling at speeds close to the speed of light, how that affects time and space. We have our mathematics to help guide us, but we also need our imaginations.

The book has a lot to say about the search for absolutes and for limits at those impossibly tiny and huge scales, about how these are always receding — we thought atoms were indivisible, then discovered electrons, then quarks, and so on — but you seem to suggest there is value in the search all the same.

I think the two things all human beings wrestle with are our mortality and our search for meaning. And, of course, they’re not unrelated to each other. I think in dealing with these two things, we long for guides, for standards, for some kind of permanence, something that will give meaning to everything — even our temporary lives. I think it’s a very deep longing. If you believe in God, then God might be it. Nonbelievers have to find it elsewhere.

So where do you go looking?

I used to think that meaning was in things that lasted a long time. I know nothing has permanence, but I used to think if you wrote a book that people read 100 years from now, that would represent a significant contribution to culture. In terms of your family, you might live to when your grandchildren or great-grandchildren can know you, and after that, whether you’re remembered depends on whether you have made a deep enough mark on the family history.

So I used to think that a measure of meaning was to engage in some kind of activity that has a long-lasting effect. I have come not to believe that anymore. I think now that meaning is in the moment. Even a book read 100 years from now will be forgotten in 500 years. I wish that there were absolutes: permanence, unity, indivisibility, all those lofty ideals, but I just don’t see any evidence for them. So I think the only thing that has meaning is for each individual to really appreciate the wonder and beauty of life at each moment, which is a lot harder to do than it sounds.

This interview, conducted by Brian Kevin, has been edited and condensed.

Alan Lightman is the author of the bestselling novel Einstein’s Dreams, the National Book Award nominee The Diagnosis, and more than a dozen other works of fiction and nonfiction. He is currently professor of the practice of the humanities at the Massachusetts Institute of Technology.