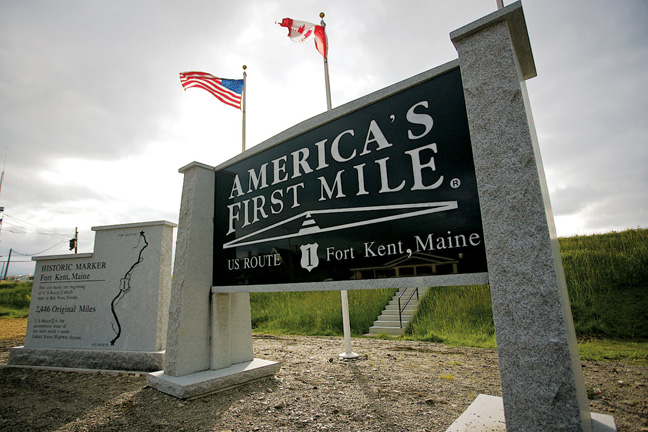 The Maine Road
Route 1 in Maine spans 527 miles, 9 counties, 81 communities, and countless subcultures. Down Eastsenior writer Virginia M. Wright and photographer Jason P. Smith drove the entire length of the road searching for the people and places that make the highway unique.

Route 1’s first fifty miles skirt the southern shore of the St. John River from Fort Kent to Van Buren, passing three international border crossings along the way. Most of the 12,000 people who live along this stretch will tell you that the border is largely a formality — albeit a more onerous one since the terrorist attacks of September 11, 2001. Predominantly Franco-Americans, they trace their roots to the Acadian settlers who built their homes on both sides of the river long before it was used to divide the Upper St. John Valley into the United States and Canada. Stop into a coffee shop or general store anywhere along this route and you are likely to overhear conversations shifting seamlessly from French to English to French. Faith, too, defines the culture here. Crosses and Virgin Mary statues are liberally displayed on lawns and doorsteps, and ornate Catholic churches dominate the otherwise humble villages. In Van Buren, Route 1 leaves the St. John River, turning sharply south to ride the open, rolling hills for which Aroostook County is best known.

U.S. Highway 1 has no first mile, and it has no last mile. Not officially anyway. It has only a pair of neutrally designated termini, Fort Kent, Maine, and Key West, Florida, with 2,390 miles of pavement between them. That’s the protocol of the American Association of State Highway and Transportation Officials (AASHTO), which coordinates the country’s vast network of U.S. Numbered Highways for the state and local governments that maintain them.

The folks in Fort Kent aren’t much for protocol, at least not in this instance. As far as they’re concerned, Route 1 begins here. The town’s slogan, adopted in November 2010, is “America’s First Mile,” and it is prominently displayed on a large granite sign near the international bridge that connects the town of four thousand with Clair, New Brunswick. (The marker replaced a wooden welcome sign that had similarly marked “the beginning of Route 1” for years.)

History supports Fort Kent’s claim. “U.S. Route 1 became the first designated U.S. Route in 1927,” says Carl Pelletier, manager of the Northern Door Inn (also known as La Porte du Nord), which shares with Rock’s Family Diner the distinction of being the first business on Route 1 South. “It started here in Fort Kent and went to Miami. It wasn’t until 1938 that they completed the Overseas Highway, which connected lower Florida to Key West.”

While Pelletier’s personal opinion is plain, he is a diplomat. Two years ago, he erected a “Historic Marker” in the Northern Door Inn’s parking lot. On one side, the sign bears the familiar Route 1 logo with the declaration: “MILE 0, Fort Kent, ME.” The other side appears identical except it asserts “MILE 2,390, Fort Kent, ME.” “If I had a dollar for every time people took photos of themselves in front of that sign,” he says, “I’d be long since retired.”

“Our record is thirty-six below.”
— John Freeman, who with his wife, Mary, serves up spare ribs, pulled pork, and barbecued chicken from the Rib Truck at locations along Route 1 from Fort Kent to Presque Isle all year round and in all kinds of weather.

Peter Pinette
Owner of Rock’s Family Diner, 378 West Main Street, Fort Kent
“Oui, je parle francais. My mother is from Edmundston (New Brunswick) and both of my parents were bilingual. Years ago Fort Kent was primarily French, and over the years it’s transitioned to maybe half and half. Across the river is Clair, a French-speaking part of New Brunswick.

“Rock’s has been here since 1945. Rock Ouellette started it as a small hot-dog stand when he was in high school, and he expanded it after he got out of the service. I’m the third owner. I bought it in 2001.

“A lot of people come to Rock’s because they’ve known it for so many years. We have heard stories of people from Connecticut who drive all night just to have a hot dog and a mixed fries, poutine, then they turn around and go back home. It’s not so much the brand of hot dogs that they like — the dogs that Rock originally served are no longer made — as the way we cook them. We slow cook them and let them age on the grill a bit.

“Saturday afternoons in winter are busy. The snowmobilers and the mushers who come for the Can-Am Crown International Sled Dog Races in February gather here. And now that the America’s First Mile monument is across the street, we have people who stop in because they are driving the Route 1 corridor.”

A sinful snack of French fries, mozzarella cheese, and brown gravy is a staple on restaurant menus in the Upper St. John Valley, although its name varies from town to town. “Here, it’s poutine,” says April Hodgson, the owner of Frenchie’s Variety in Grand Isle. “In Fort Kent, they call it ‘a mix,’ and in some towns they call it a ‘godfather.’ “ Across the St. John River in Canada, where the dish was invented, fresh cheese curds, not mozzarella, are used.

Cyr Plantation is comprised of 13,000 acres of forest, 9,000 thousand acres of farmland (much of it woodlots), and 107 people. It is the first of three plantations that travelers encounter as they travel south on Route 1, and one of thirty-four such civil divisions in Maine.

So what is a plantation? “It goes back to when Maine was part of the Massachusetts Bay Colony, and it was intended to be a temporary government to guide a community from an unincorporated township to an incorporated town,” says Eric Conrad, spokesman for the Maine Municipal Association, “but they’ve continued in Maine and uniquely so.”

Unlike an unorganized territory (such as Cyr’s neighbor, Connor), which is governed by the county, a plantation has a local governing body — the annual meeting where community members approve a budget, set policy, and elect a board of assessors to see to day-to-day operations. Cyr voters gather for their annual meeting in the 1934 Governor Brann Schoolhouse, a well-preserved one-room red schoolhouse on Route 1, about one mile from the Van Buren town line. Unlike a town, however, a plantation does not have complete home rule; its zoning and planning authority is the Maine Land Use Regulation Commission (LURC).

Cyr’s population peaked at five hundred people in the mid-1800s when the Homestead Act of the State of Maine encouraged expanded settlement. In the years since, the population slowly declined. “We haven’t grown, but that might change,” says first assessor Danny Devoe. “They’re building a big new port of entry in Van Buren and that will probably create one hundred to one hundred and fifty jobs. Some of those people have expressed interest in living in the rural areas outside Van Buren.”

A retired potato farmer, Devoe has family roots in Cyr that date back to the 1850s. “The other two assessors’ families have been here since the 1840s and1850s,” he adds. “The same is true for the clerks and the treasurer. The same families have been governing this community for the last 150 years. Not much has changed in Cyr Plantation.”

Leo Cormier
Leo’s Barber shop, Main Street, Van Buren
“My mother and father were Canadian, but I was born and raised here. You find that a lot around the Valley. When my daughter was going to school, they told her, ‘Speak only English.’ The nuns were forcing that. Why would you want to let your culture go? We always spoke French to her at home. She turned around and went to school in Boston and got a job at Mass General Hospital. When French-speaking patients came in, they’d call her over to translate. It’s an advantage to know two languages.

“Van Buren used to be a booming little town. When I started this business in the seventies, we’d work until nine or ten at night on Fridays and Saturday. Now I’m done Saturdays at noon. The town really changed when they closed Loring Air Force Base. That was a shocker. A lot of Canadians used to come here, too, but then they started their own shopping malls.

“If you don’t like a busy atmosphere, this is the place you want to be. But if you’re young and you want to earn a living, it’s hard. I see it so often where some of my old classmates come up from Connecticut and say, ‘We’d love to move back now, but we had to leave to earn a living and now we don’t want to leave the grandkids.’ But they still come to visit. They love to visit.”

Madawaska, the country’s northeasternmost town, is a mandatory checkpoint on the Four Corners Tour, which challenges riders to visit the four corners of the Lower 48 in twenty-one days. It is the only town with a park dedicated to the circuit — Madawaska Four Corners Park on Main Street (Route 1) — and the only town that offers groups of riders a ceremonial police escort.