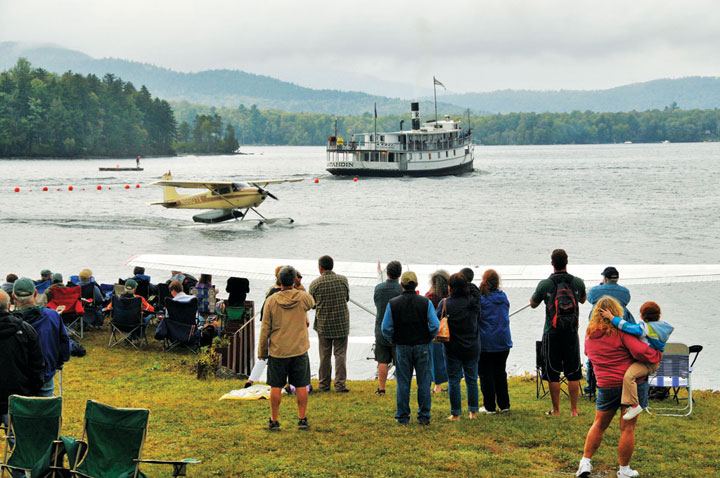 Seaplanes from around the country descend onto Maine’s largest lake every September for Greenville’s Seaplane Fly-In.

By Will Bleakley
Photographed by Alan Lavallee

From the September 2013 issue of Down East magazine

[G]reenville owes David Quam a milkshake. In fact, the town may be legally bound to this agreement. It’s written down, somewhere, Quam insists, that whenever he comes to the area he’s entitled to exactly one vanilla malt. And he deserves it. “I have to remind the town manager when I go,” Quam, the founder of the Seaplane Pilots Association, says. “But he always says, ‘Okay.’”

Drive up Route 15 to Greenville on September 7, and you’ll see why the town manager gives in year after year. It’s the least he can do for one of the people responsible for turning the International Seaplane Fly-In from a niche get-together of recreational seaplane enthusiasts into the largest and most competitive event of the year around Moosehead Lake.

At its core, the fly–in, which began forty years ago in 1973, is a celebration of the pelagic specimen known as the seaplane. It’s the Atlantic puffin of aviation. This creature of both sea and air inspires deep affection and a large cult following — not for its grace, but, partially, for its lack thereof. There’s nothing smooth about a plane landing on or taking off from water. For those who have never experienced it themselves, you wonder how passengers don’t vomit from a hybrid of sea- and airsickness. But when nearly one hundred of the world’s fastest seaplanes manned by the best pilots gather on Maine’s largest lake for a series of competitive events at the tail end of summer, it inspires more than curiosity — it’s thrilling to watch.

Seaplanes dot the sky as thousands of fans line the shore of Moosehead Lake. Vendors set up along the streets to sell knickknacks. Restaurants and hotels are booked for miles while the steamship Katahdin runs at full capacity — true feats for an out-of-the-way Maine town after Labor Day. The most popular event is the Takeoff Contest. Two seaplanes, of near equal weight and size, race to make it into the air first as onlookers cheer. In the Bomb Drop, planes soar over the crowd as pilots test their accuracy by dropping grapefruits onto targets below. In another more unusual competition, two people race in canoes to a float and tie their canoes to an aircraft that then taxis to the finish line.

The event is truly international, attracting pilots and fans from as far as Sweden, but the fly-in’s popularity, according to Duane Lander, one of its founders, is tied to the history of seaplanes in Greenville. “We’re on the edge of the North Woods, where the roads used to end,” he says.  “Pilots around here were legends in their time. To get to the Allagash River, to the back ponds, you needed to go by floatplane.”

Forty years later, Lander still mans the patrol boat in the middle of the lake. His competitive flying and seaplane waterskiing days are behind him (“the plane would actually lift off while I skied,” he says, laughing), but you can expect to see him, Quam, and nearly ten thousand others celebrating forty years of takeoffs, grapefruit drops, canoe races, and an entire history of Maine seaplanes during the first full weekend in September.

Get the milkshake ready.

IF YOU GO: The International Seaplane Fly-In takes place in Greenville every year the weekend after Labor Day. Visit this year from September 6–9. Contests take place on Saturday, September 8. Call 207-695-6121 or go to seaplanefly-in.org for more details.

Do You Even Love Maine If You Don’t Have a Maine-y Tattoo?