Nine of our favorite spots to enjoy the state’s quintessential treat — and our favorite places to explore nearby. 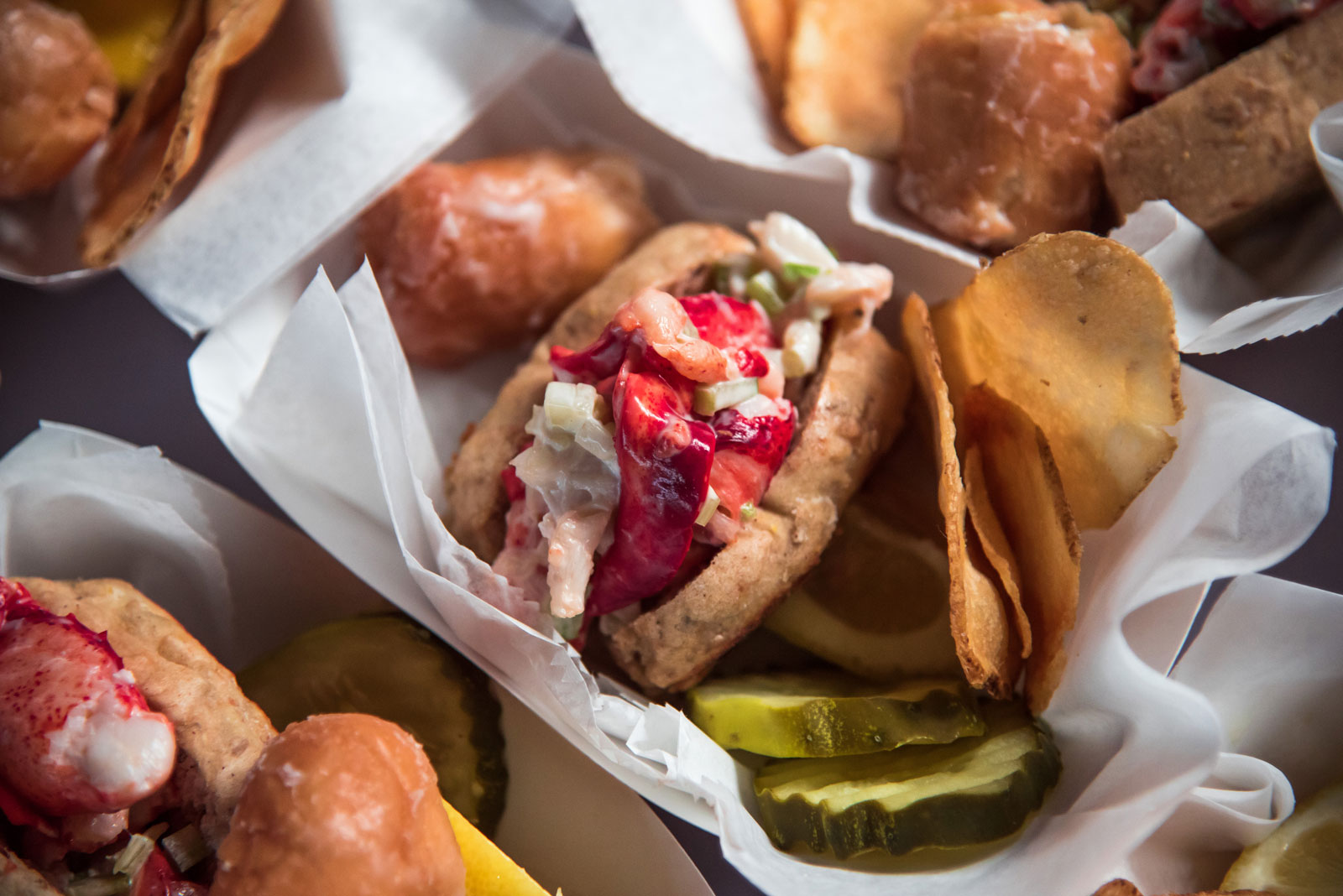 Put down the cracker and bib — in the last few decades, the lobster roll has usurped the old-school shore dinner as Maine’s big prize for traveling gourmands. Half the appeal is the sweet simplicity of a griddled bun, all buttered up and filled with freshly picked lobster. The other half is the setting: the best rolls are usually consumed someplace where you can smell the sea and have to watch out for hungry gulls. Our south-to-north guide to the Maine coast’s best lobster rolls includes some suggested outdoor-rec pairings — because you may want to preemptively burn some of those butter calories.

The roll: Five-and-a-half ounces of just-picked, boiled-in-seawater Cape Porpoise lobster mixed with a little mayo, a little melted butter, or both. The Clam Shack’s roll is a delicious iconoclast, eschewing the classic split-top bun for a round, locally baked yeast roll. It’s soft as a cloud and totally works.

The scene: A tiny white shanty on a bridge over the tidal Kennebunk River, it’s smack in the middle of the Kennebunks’ high-traffic tourism quarter. You can eat at tables in the adjacent fish market or outside at picnic tables and lobster traps topped with plexiglass. The bad news: At the height of midsummer tourist season, expect to wait in line as long as an hour.

The side dish: Fried full-belly clams. Sweet and plump, in a crunchy crumb coating, they rival the roll for regulars’ affections.

Explore: Surfers find consistent swells at two beaches a few minutes away: Fortunes Rocks, in Kennebunkport, and Gooch’s, in Kennebunk. Aquaholics Surf Shop, a quarter-mile from the Clam Shack, can point visitors to the breaks and offers rentals and lessons. At the height of summer, water temps may even reach the low 60s!

The roll: You can go classic: Maine-style, with mayo and chives, or Connecticut-style, with only drizzled butter. Or you can go avant-garde, dressing your roll in wasabi, coleslaw, smoky chipotle, or yellow-curry mayo.

The scene: The Bite Into Maine food truck is right next to Portland Head Light, one of the world’s most photographed lighthouses. Lay a blanket on the grassy lawn and watch the waves crash.

The side dish: Nothing pairs with lobster like more lobster! The creamy bisque has generous chunks of claw and tail and a sprinkling of chives.

Explore: The food truck is in the middle of 90-acre Fort Williams Park, where a mile-long loop trail skirts oceanside cliffs and some old, abandoned military batteries. Six miles south, the trails at Two Lights State Park access 41 acres of rocky headlands full of tide pools and ripe for clambering.

The roll: Lobster meat dressed in brown butter, lemon, and chives, served in a split-top, Asian-style steamed bun. Purists may scoff, but Eventide’s fancy-pants roll is to die for.

The scene: In the heart of Portland’s Old Port District, where cobblestone streets are lined with 19th-century brick buildings housing restaurants and boutiques. The restaurant’s a hip spin on a seafood shack, with indoor picnic tables and a 1,500-pound granite basin filled with ice and oysters.

The side dish: Any of a dozen varieties of fresh Maine oysters, served on the half shell.

Explore: From racks on East End Beach, a dozen blocks northeast, Portland Paddle rents kayaks and leads trips to Fort Gorges, a cool 19th-century garrison on Hog Island in Casco Bay. The 2-mile paddle out crosses boat channels with heavy commercial and recreational traffic, so it’s wise to go with a guide.

The roll: The correct order is “the Big Boy,” a roughly 10-ounce roll with lobster lightly dressed in mayo and overflowing its split-top potato bun.

The scene: Out of a movie set: picnic tables on a working wharf, menu on a chalkboard, traps stacked up nearby, and lobsterboats bobbing in the bay in front of a cluster of spruce-studded islands. BYOB.

Explore: The tiny Ipcar Preserve, right next door to the lobster shack, is a popular spot for an after-dinner stroll through mossy woods, while the Ledgewood Preserve, a quarter mile south, has a trail to a little-visited, boulder-strewn beach.

The roll: Arguably Maine’s most famous lobster roll, Red’s roll has an ultra-generous portion of meat — whole claws and tails — dropped naked on a grilled split-top bun. That’s it. Extra-heavy mayonnaise or drawn butter on the side, if you want.

The scene: In the pretty, historic village of Wiscasset, Red’s looks like a little red caboose parked on the bank of the Sheepscot River. Seating is on a shady deck behind the stand or along the grassy riverbank. The line to order is long — waits of over an hour aren’t uncommon.

The side dish: Fried zucchini in a golden, puffy batter.

Explore: Mountain bikers head across the bridge and down a couple miles of back roads to the Schmid Preserve, in Edgecomb, where more than 10 miles of single-track and old forest roads crisscross a 270-foot hill called (appropriately, for our purposes) Mount Hunger.

The roll: The standard split-top roll, brushed with mayo or with a dish of drawn butter and filled with super-fresh meat — lobsters are held in floating crates right next to the dining patio, then plucked from seawater and tossed straight into a pot.

The scene: Far from the Route 1 tourist traffic — on bridge-accessed Spruce Head Island, off the St. George Peninsula — this little shack overlooks Seal Harbor, dotted with islands and lobsterboats coming and going from the McLoons wharf.

Explore: At the tip of the peninsula, 14 miles down the road, Port Clyde Kayaks and SUPs offers rentals and tours, including a morning paddleboard excursion around Marshall Point Light, an iconic beacon and popular photo op for distance runners.

The roll: Lobster purchased each morning from the fisherman’s co-op across the harbor, cooked in salt water and mixed with Hellman’s and a little pepper.

The scene: The deck overlooks lobsterboats and wharves stacked high with traps. Former lobsterman Joe Young runs both the restaurant and an art gallery, an old fish house full of photos of mid-20th-century Corea.

Explore: Corea is just down the road from the Schoodic section of Acadia National Park, which gets far fewer visitors than neighboring Mount Desert Island. Some 8 miles of hard-gravel bike trail wend through woods and along the rocky shore, and hiking trails reach the summits of Buck Cove Mountain and Schoodic Head, offering knockout views of the Atlantic and the rounded peaks of MDI.

The roll: Shredded lobster dressed generously with mayo and topped with a whole claw.

The scene: Connected by bridge to mainland Jonesport, Beals Island is well off the tourist track. Diners sit at picnic tables overlooking a harbor filled with fishing boats.

The side dish: Locals eschew the roll in favor of multiple filets piled up on the ginormous fried-haddock burger. But you can eat both, right?

Explore: A mile down the road, the Nature Conservancy’s Great Wass Island Preserve is a peaceful place to spot seals, dolphins, eagles, and ospreys. A 4½-mile loop trail winds through a jack pine forest and over the island’s vast, exposed-granite headlands.

The roll: Mix your lobster with mayo, Miracle Whip, drawn butter, or any combination of the three. Feeling snackish? The junior roll has just 2 ounces of meat. (The regular has 4, and the jumbo piles 8 into an 8-inch bun.)

The side dish: The yummy, comforting fish chowder — haddock, potatoes, and onions in a creamy stock.

Explore: Charter boats like Fundy Breeze Charters make whale-watching and deep-sea fishing excursions into Passamaquoddy and Cobscook bays. If you want to work for your supper, Eastport Windjammers offers daily trips on a lobsterboat past the Old Sow whirlpool and East Quoddy Lighthouse, with the crew stopping to pull traps along the way.

A Browser’s Guide to Downtown Searsport

10 Maine Races to Run Before You Die

How to Win Gold at the National Toboggan Championships