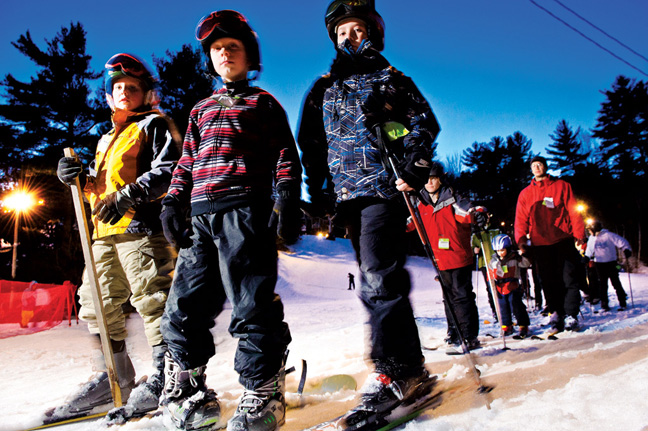 Lost Valley, a low-key ski slope in Auburn, has taught generations of Mainers to love the cold.

For most of the weekday, the trails at Lost Valley are eerily quiet. “It can be a ghost town here,” says Connie King, who along with her husband, Lincoln Hayes, owns this small ski area located five miles outside of downtown Auburn. Its eighteen trails, forty-five skiable acres, and two chairlifts open at 2 p.m., but little happens over the next couple of hours. It’s the deep breath before the chaos at 4 p.m., when, in droves, parents’ minivans and buses from more than twenty schools line the entrance and help turn this unassuming hillside into the neighborhood’s ultimate winter playground.

Free from the shackles of teachers and parents, competitive high-school teams, middle-school snowboarders looking for something to do, and still-learning tots release a day’s worth of pent-up energy by flying down the mountain with reckless abandon until dinner time. It’s been this way every winter at Lost Valley for fifty-one years. Little has changed, and that’s just how Mainers like it.

Lara Kendall, a third-generation Lost Valley patron from Auburn, recalls when she first encountered the mountain. “I looked up, and it was absolutely huge,” she says. “I thought I could never do that.” Its peak rises only 240 feet from the base of the mountain and its trails fit snuggly among Auburn’s gently rolling hills. To then four-year-old Lara, the slope was terrifying.

Like her father, grandfather, and so many Mainers before her, she conquered the hill after a few short runs but made it her skiing epicenter for the next fourteen years. “The access was great. It was ten minutes away, and I could ski every day and didn’t have to drive hours to get to Sugarloaf,” Kendall says. “We’d meet our friends or cousins there and have little roaming gangs going around the mountain. It was our version of going to the mall.” Its short slopes and community atmosphere make Lost Valley a comfortable place to learn to ski or snowboard.

To those with warm memories, however, the slope was less about mastering techniques than learning to love the sport at its most wholesome — away from the lighting quick superquads, overwhelming crowds, and hundred dollar lift tickets of larger mountains. “That’s what skiing should be. It shouldn’t be elite. It should be accessible to anyone who wants to try it,” according to former Olympic skier Julie Parisien, who developed her passion for the sport on Lost Valley’s slopes while growing up in Auburn. “You put on whatever you have — your hunting gear even — and you go flying down the hill. Lost Valley embodied that for me. Its small size let me do forty or fifty runs in just a few hours every day. If my only option was being a weekend skier at Sugarloaf, my career wouldn’t have been the same.”

Lara Kendall’s father, Dick, who started the mountain ski school that trained Parisien, believes Lost Valley offers an essential aspect of skiing that destination resorts can’t: A safe, comfortable environment where kids can be free from parents, and parents from worry. “Parents can drop their kids off, have a cup of coffee in the lodge, read the paper, and still see their kids on the slopes. That’s impossible on a larger mountain, because you’d lose them,” he explains.

While parents relax by the fire, mischief reigns supreme on the slopes. Children play Road Runner to the Ski Patrol’s Wile E. Coyote. Julie Parisien remembers when her brother hit a jump, got some air, kept on going, and damaged the owner’s car. Lara Kendall’s father and Dick’s son, Thomas Kendall, a former Junior Championship competitor, built chutes in strategic, inconspicuous spots to avoid being caught breaking the no-jumping rule. Decades later, Bump Heldman, of Auburn, and a current senior at Bates College, similarly timed his biggest jumps for when the patrollers’ heads were turned. “It was more than just skiing there. It was community and it was fun,” Heldman says. “That’s what I’ve found about the sport. If you’re not having a fun time, it’s not worth doing.”

Since the slope’s opening, longtime patrons have witnessed one notable change: Snowboarders now rule the mountain. “There are days when they can take up 75 percent of the hill,” says co-owner Hayes. A top-notch terrain park, where anyone can practice high-flying tricks, replaced the strict no-jumping rule, but the energy of a bygone era remains. “I haven’t skied there in many years, but Lost Valley isn’t a place that changes,” Heldman says.

Seasoned skiers like Heldman or the Kendall family, now accustomed to mountains fifteen times Lost Valley’s size, rarely return without a child of their own to gently guide down the hill. Still, the memories of the slope’s intimacy and local spirit linger in ways those from larger resorts can’t. Another former Olympic skier to come through the resort, Lewiston native Karl Anderson, says, “Lost Valley is one of those places you remember warmly for your entire life. You know, you don’t remember how much time you spent in the office. But those days after school on those slopes are what lasts.”